It was inevitable that my resolution to post once per week on WordPress would eventually come unstuck.  That was predictable, the last eight weeks less so.  Cooped up for so long, it was also inevitable that when a hint of freedom appeared, all other priorities would be thrown to the four winds.  On 13th May it was finally decreed safe to ride motorcycles again, although not over the border into Scotland where the restrictions remain.  I have lost no time in clocking plenty of miles, some menacingly close to Reiver country … 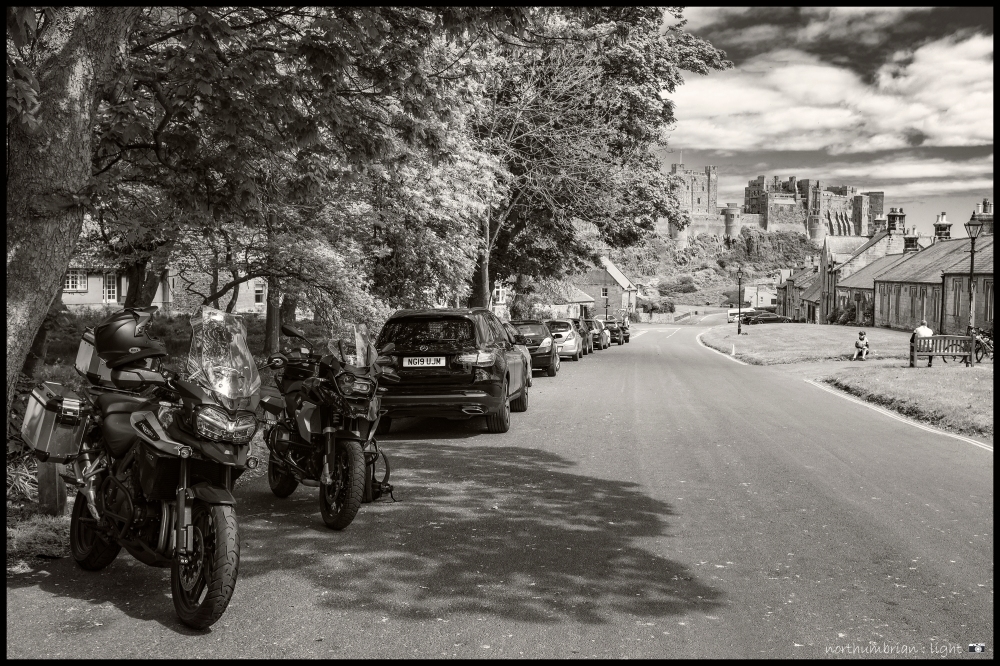 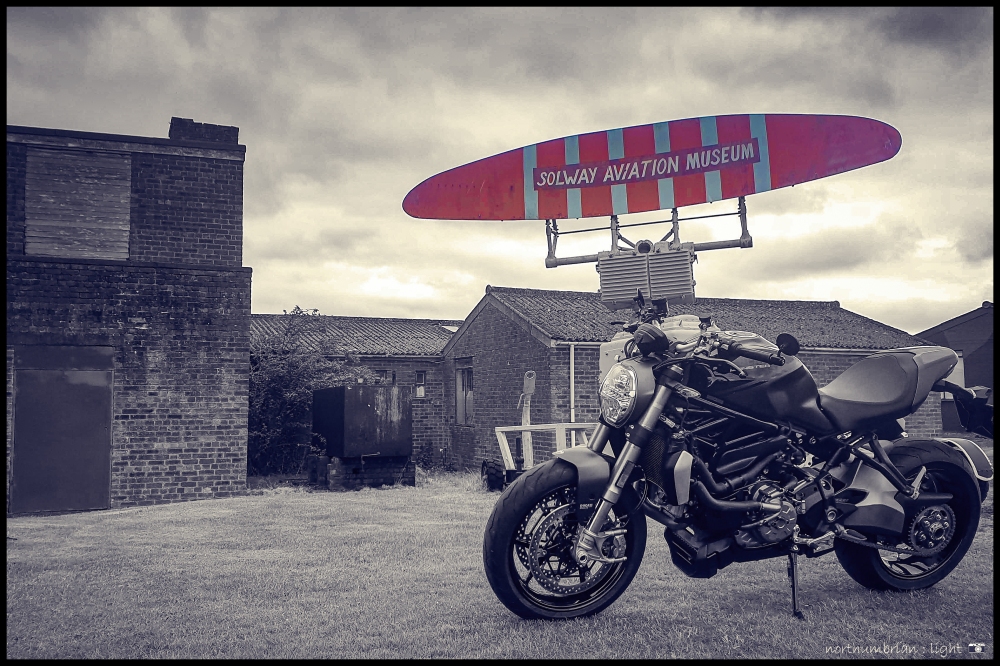 At the Air Museum (closed)

In my unending quest to make connections with my past, I came across this magnificent machine at Mike Barry’s Motorcycle Museum, Scaleby, near Carlisle, Cumbria.  Any time I take a ride out for a chat with Mike is never wasted: 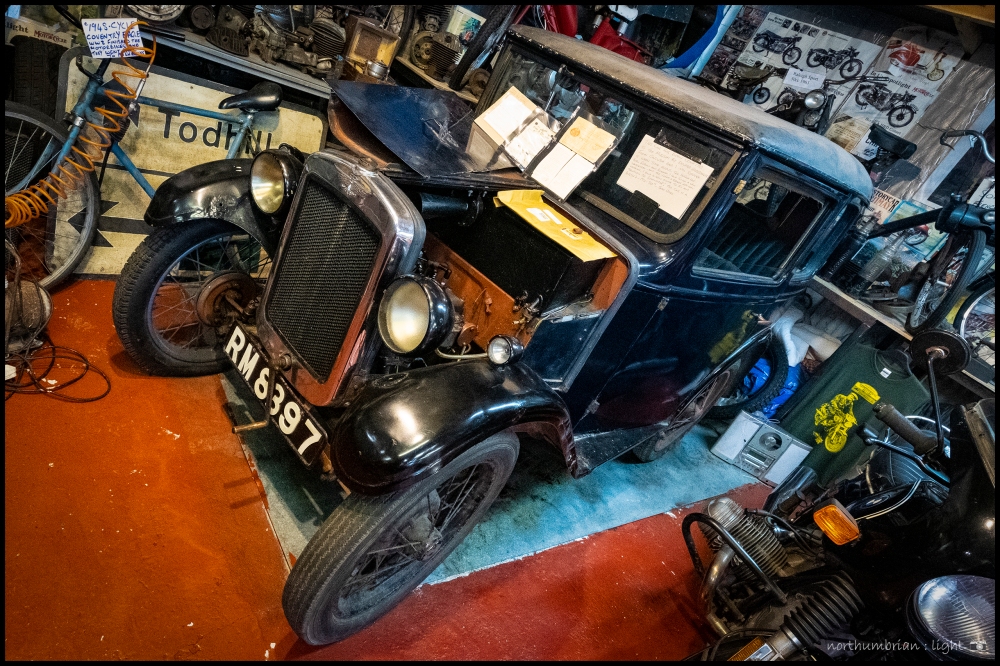 The attraction of this vehicle is that it was probably manufactured around the same time as the one proudly displayed by my paternal grandparents and featured in an earlier post:

My dad will have sat in a passenger seat very similar to this although, judging by his lack of interest in all things mechanical (an industrial chemist by profession), I doubt he spent much time looking under the bonnet: 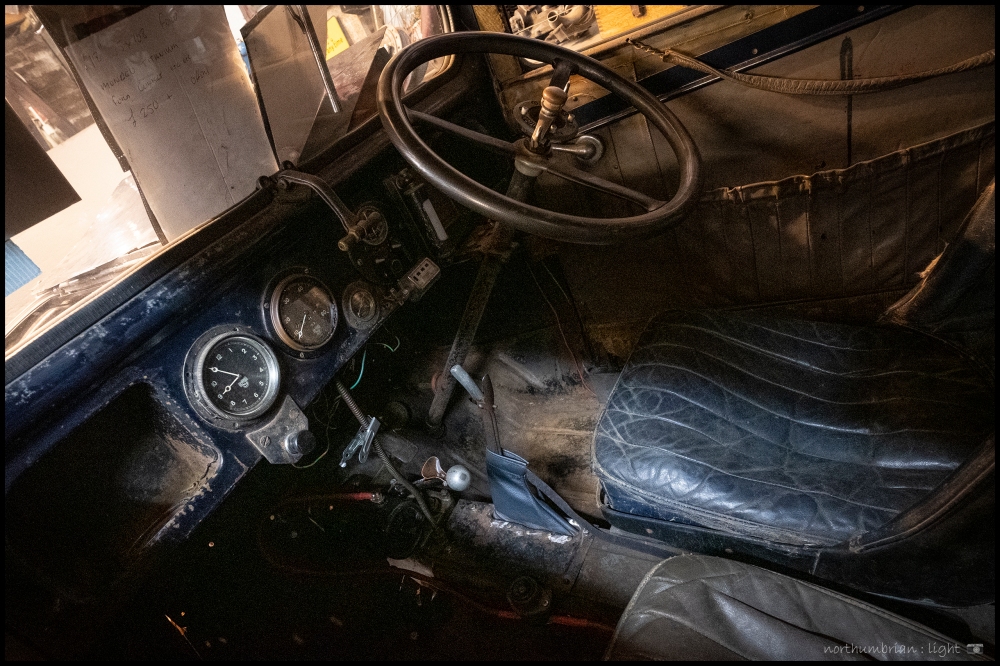 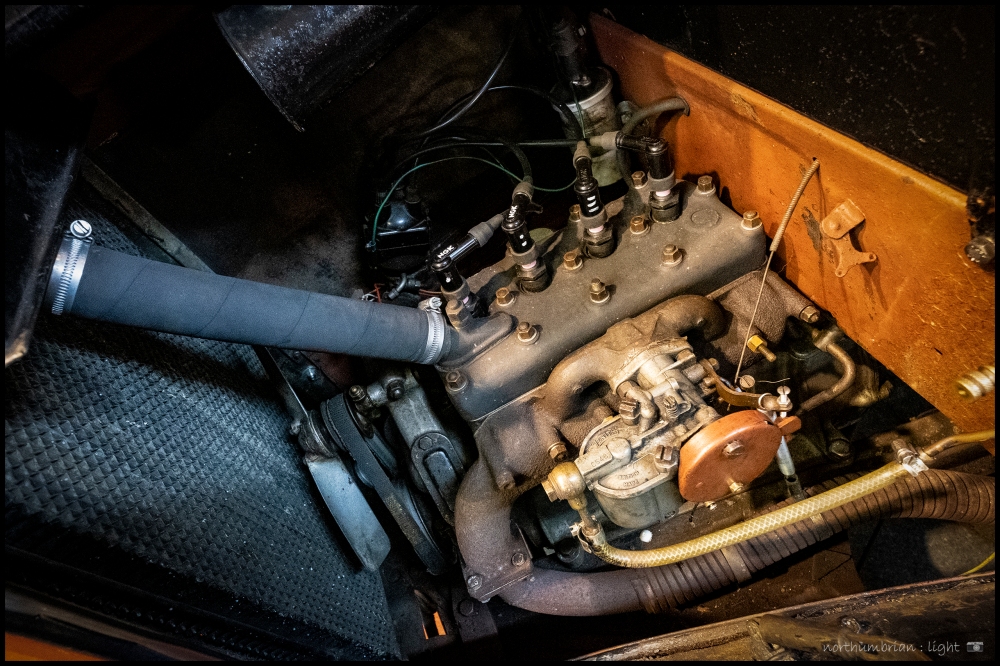 Mike has attached the following to the windscreen:  This car has been donated to the museum by Dougie Hargreaves from Carlisle and I will restore it when time allows.  The engine has been rebuilt and running.  I have fitted a new windscreen and the lights and brakes are now working.  I have a new clutch to fit and then it will be roadworthy!  The car is an Austin 7 – 1931 – 750cc – three speed.

Among the documentation for the car is a 1940 Ration Book for the months of August, September and October 1940.  The coupons in this book authorise the furnishing and acquisition of the number of units of motor spirit specified on the coupons subject to the conditions appearing thereon.  The issue of the Ration Book does not guarantee the holder any minimum quantity of motor spirit and the book may be cancelled at any time without notice.  Any person furnishing or acquiring motor spirit otherwise than in accordance with the conditions on which these coupons are issued will be liable to prosecution … Private Walker, take note.

And for those wondering what else can be found in this ultimate man cave, an image of just part of Mike’s private collection: 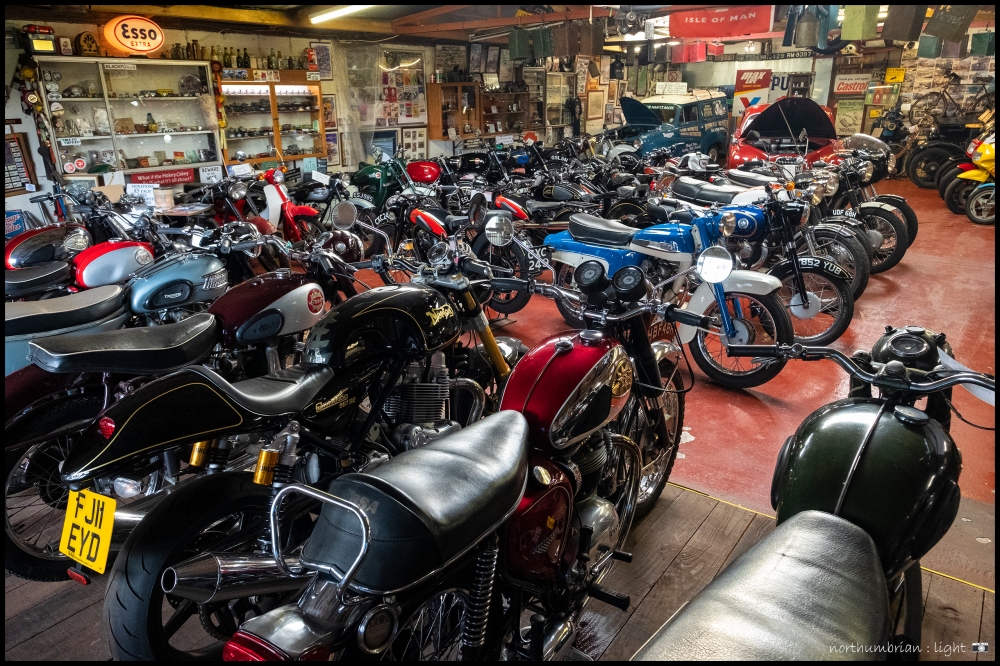 Motorcycle Museum – part of the collection

The trip to Duns has become an annual pilgrimage.  Last year in April, to commemorate fifty years since Jim Clark’s death at Hockenheim in 1968 and, this year, for the opening of the extended and much enhanced museum. Last year in the Elise, this year, 167 miles on the F850 GS on a perfect day for riding.

The displays include a new commemorative film, his trophies, a walk-around time-line of memorabilia and two of his iconic vehicles:  the Lotus 25 R6 on loan from the Tinguely Museum Switzerland and a Lotus Cortina on loan from Dario Franchitti – perfect choices.  Clark was stunning in any Lotus but for real entertainment, there was no better sight than Jim flying the Ford at ten tenths through the apex on three wheels.

The Power of One

The Lotus Cortina “in flight” 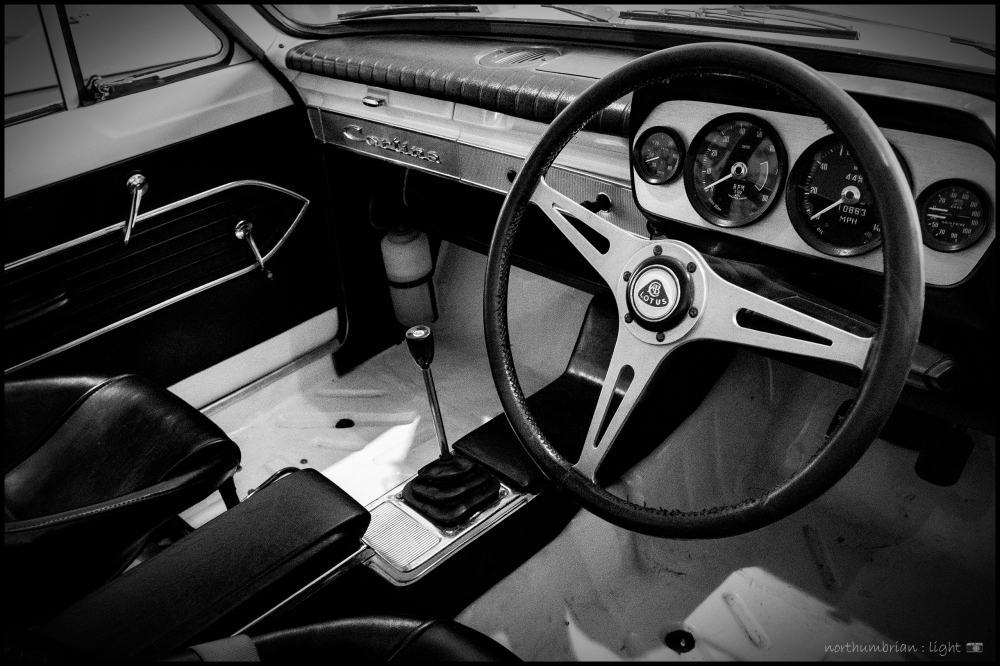 Looking at the Cortina more closely, I was reminded that they were originally badged under the Consul brand. My parents belonged to the ‘Ford family’ owning three consecutive Consuls throughout the 1950s and early 1960s. They have appeared at various times in this blog, including the original MK1. Just at the time they might have gone down the Cortina road, they chose the Corsair – a big mistake, the first being so unreliable, it was quickly replaced by another. I can only assume at a significant discount.

The primary difference between the two Corsairs was that the first’s crunchy column-change was finally replaced with a standard floor-change in the second. Mother had learned with a column-change and in her usual determined fashion, she was sticking to it, long after it was a good idea. When they returned from working abroad in the mid 1970s they remained loyal to Ford, finally acquiring a Mk III Cortina. After that it was a Volvo 343 followed by a series of pedestrian Vauxhalls. As with many other aspects of their later years, automotively they had lost their way.

Yesterday was a glorious late summer’s day so we headed south over the moors to Bernard Castle and the Yves St Laurent exhibition at the Bowes Museum. Not exactly a boys day out but fun can be had by pushing the Fuji in the near dark. The results are more sinister than the curator or YSL might intend although not entirely inconsistent with Helmut Newton’s iconic street image of Le Smoking tuxedo. Whilst I was wandering about being ‘creative’, the good lady was entranced by the exhibits. 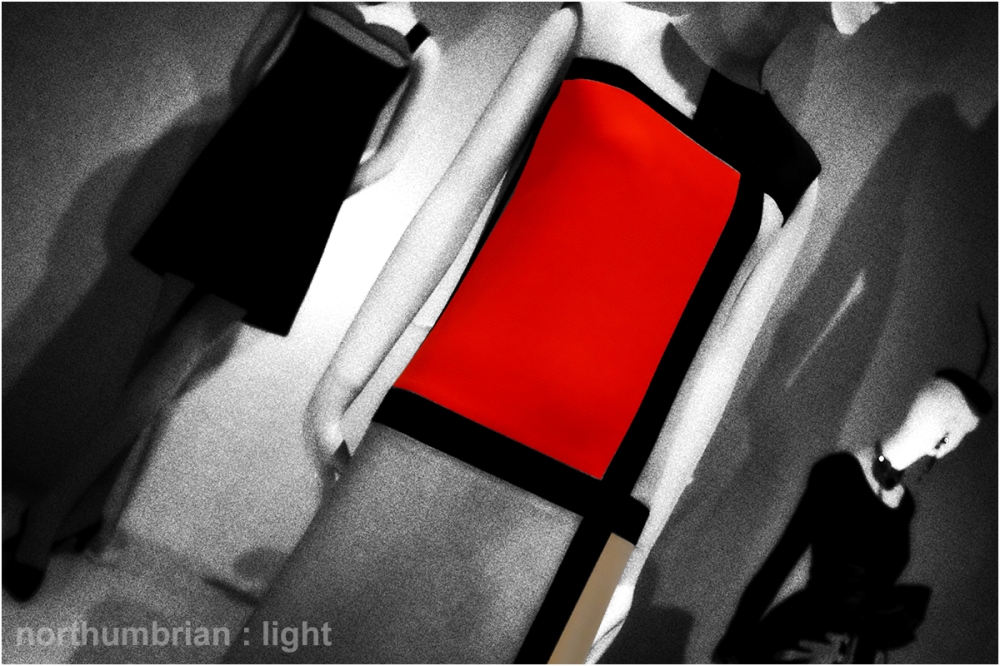 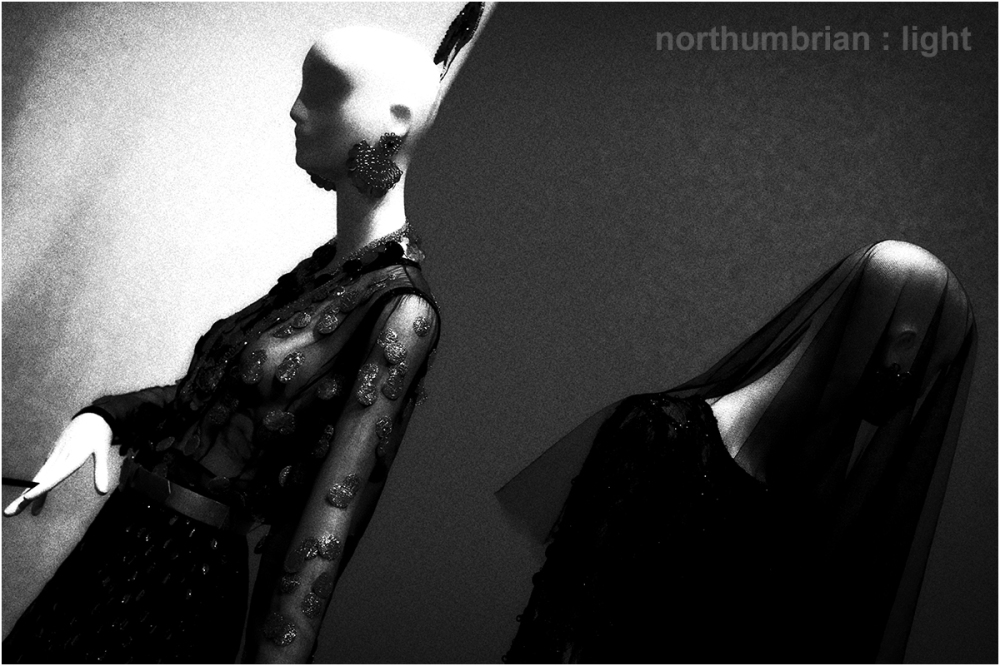 It was a dull morning with no immediate prospect of change.  Consequently I donned the headphones, switched on the laptop and escaped into the world of Breaking Bad – I am up to Season 4, Episode 7.  As the series progresses Jesse Pinkman (Aaron Paul) is developing a disturbing likeness to my middle son – fortunately the connection is purely visual.

This was followed by a trip to Manoir Automobile Du Village De Loheac – heaven!  How I have missed this on previous trips to Brittany I do not know. Naturally the displays have a distinctly Gallic flavour but this is of no consequence. The highlights are the Ferrari section, a full Formula 1 grid, a glorious collection of Group B rally cars and a carbon fibre tub to climb into and pretend 🙂  Outside there is a rallycross stage and a tarmac circuit – some distance from their natural home, three NASCAR Chevys of unknown vintage were circulating at about seven tenths. 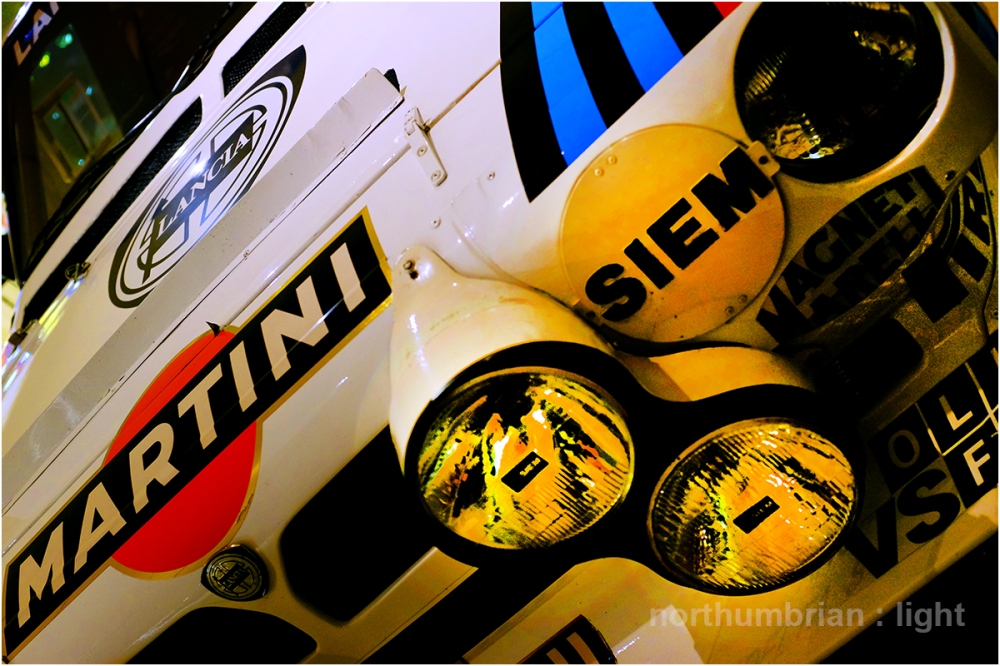 This video captures perfectly the wondrous insanity that was Group B Rallying – listen for the “Dear God” exclamation at about 4 minutes 45 seconds – quite restrained considering:

The icing on the cake was a trip to Caden Golf Course under a perfect sky.  A nine hole course with eighteen hole prices it was, nonetheless, a very enjoyable round – at just under 6000 yards over eighteen holes it is a testing tract with some quite alarming tee positions, particularly the second.

Throughout this perfect day, the beloved followed, uncomplaining 🙂

Just a perfect day
you made me forget myself
I thought I was
someone else, someone good

This is a section from the Berlin Wall on display at the John F Kennedy Presidential Library and Museum in Boston.  Depending on when the graffiti was added, these colors represent either freedom or oppression:

By contrast, these are the colors of Curacao: 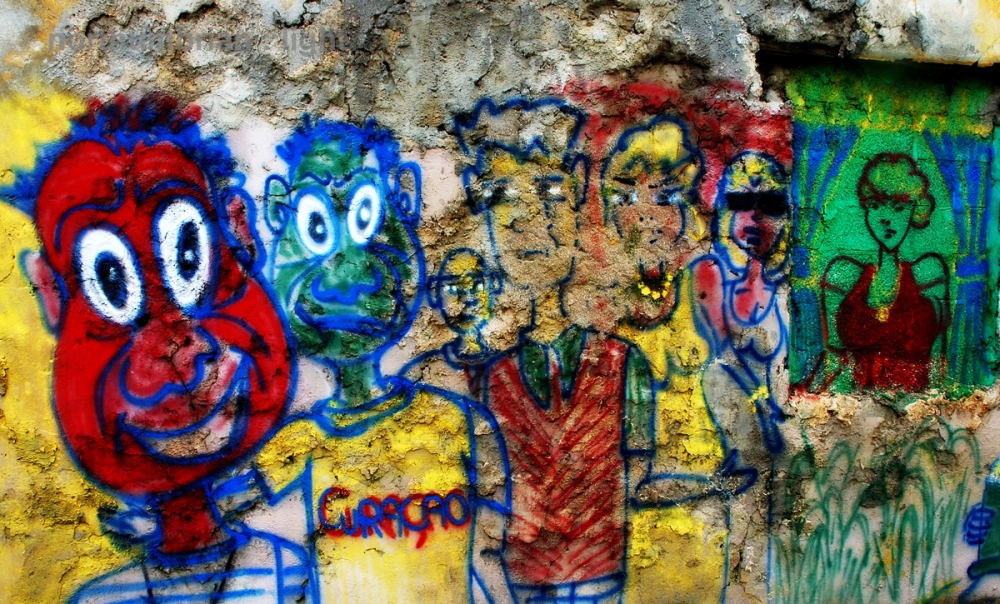 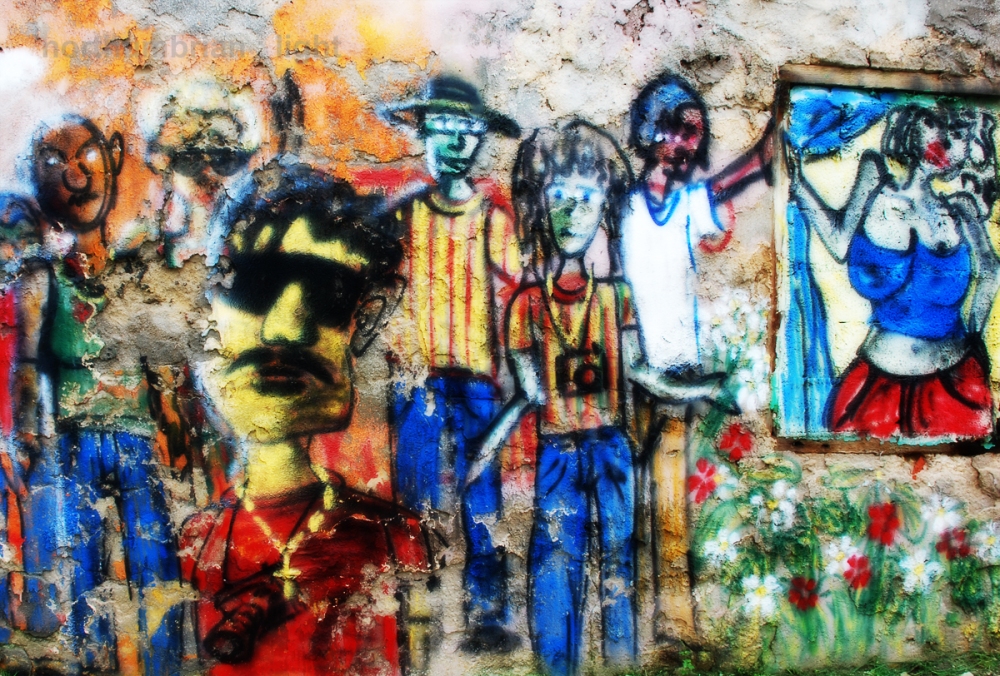 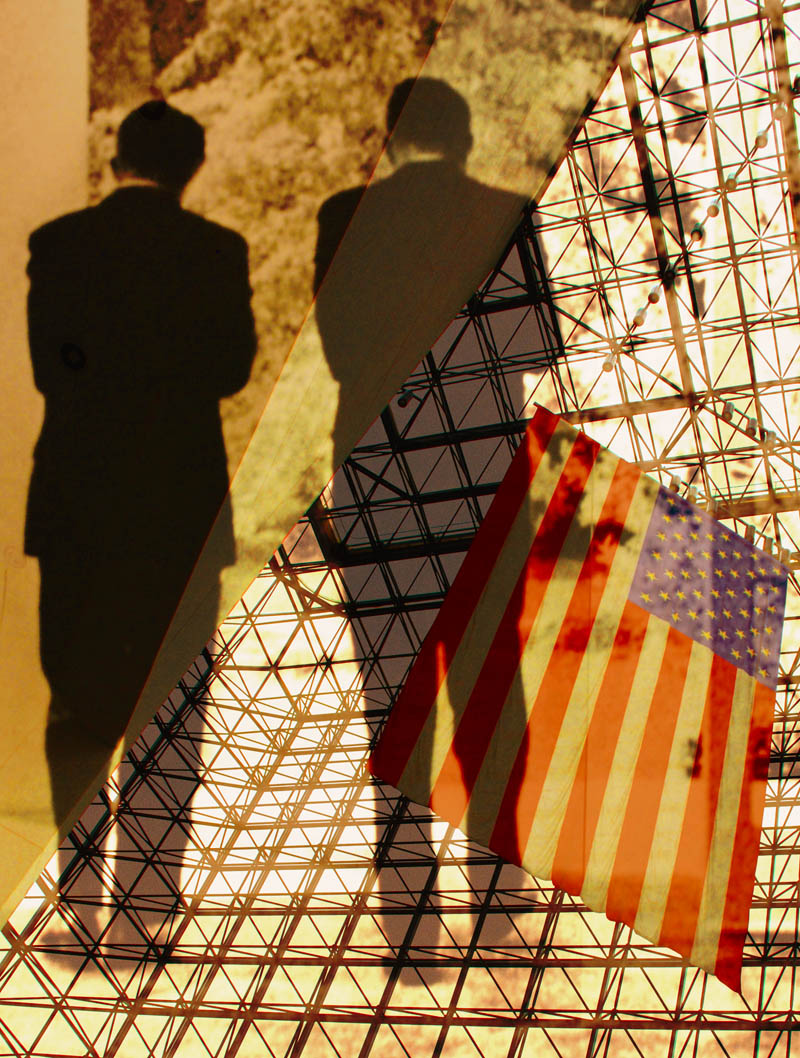