I was originally intending just to list the equipment I use to take the photographs on this blog but this set me thinking of the cameras from my past.  This turned into a trip down memory lane which also gives away my advancing years.

When I was growing up there was only ever one of everything – why would you want two cars when you can only drive one at once, why would you want two televisions when you can only watch one and there was only the single BBC channel; simpler times.  The same principle applied to cameras, consequently there was the family Kodak Brownie Cresta which we all used – although with only 8 exposures to a roll of film, not very often.  This would have been taken by my Dad around 1955:

Dad then took a real interest in photography starting out with a darkroom in the cellar where he taught me the joys of black and white development/printing and then, as an industrial chemist by trade, he migrated to the Agfacolor print process.  On the basis of cost and complexity, I stuck with black and white.  At the same time he invested in a second hand East German 35mm Werra camera which was fitted with a Carl Zeiss Jena lens.  This I would borrow and take to the race track at Oulton Park every other weekend throughout the summer: 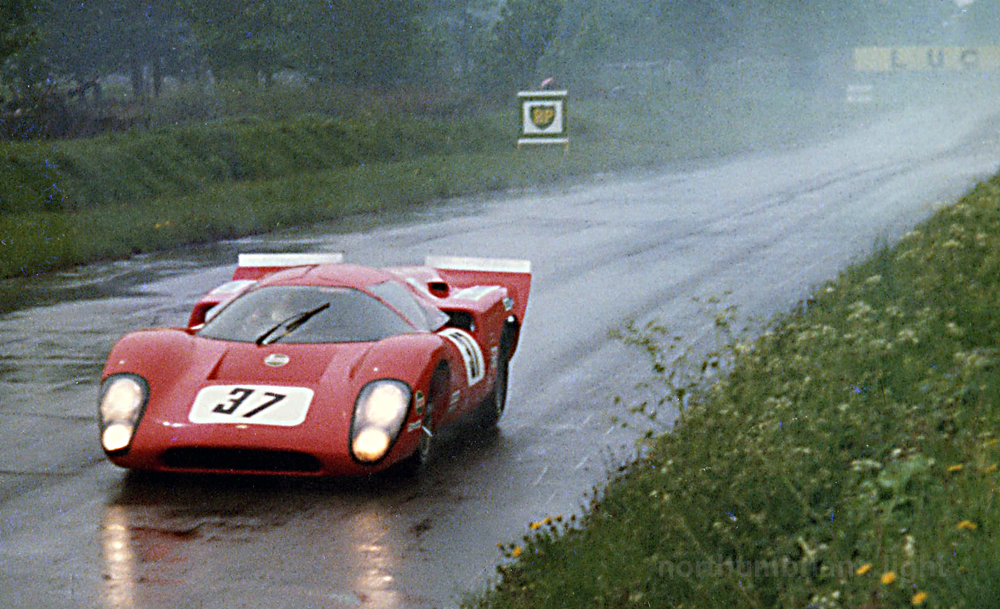 I still have that Werra in a box somewhere in the loft, and I still have my Dad’s next acquisition, a hulking great 2.25″ square Mamiyaflex C330F Twin Lens Reflex with exchangeable lenses – it produced fabulous quality negatives but it was like taking part in an early BBC Outside Broadcast; there was never an opportunity for the discreet candid photograph.  Although I later inherited and occasionally struggled with the Mamiyaflex, I went down a separate route and acquired my first Single Lens Reflex – the Praktica LLC.  Another East German camera fitted with Carl Zeiss optics, it was at its best when fitted with a borrowed 135mm lens:

Over the years I acquired a collection of screw fit lenses for the Praktica and carried this lot around with the Mamiyafex, it is no surprise therefore that I was eventually seduced by the David Bailey adverts for the jewel like Olympus OM series (see earlier post) – a black OM1 for monochrome and a semi-auto OM10 for colour.  Never mind the photography, they looked great round your neck :-):

I had those OM cameras for about 15 years before selling the OM1 and passing on the OM10 to my eldest son; and so the passion was handed down to another generation.  The Olympus cameras were replaced with a Minolta Dynax 700si with 28-80mm zoom and it with this device I started the migration to digital and the world of Photoshop, using the Kodak PictureCD conversion service:

From this point on it has been digital all the way starting with a Fuji FinePix6900 Zoom, changing this for an 8 megapixel Olympus C-8080 with a particularly fine 28-140mm zoom which in turn was exchanged for my first digital SLR, the Nikon D80 + 18-135mm DX Zoom.  I still have this camera for hacking about but with the latest purchase I feel I have come full circle, back to my Praktica LLC – a full frame Nikon D600 with just two prime lenses, a 50mm and 24mm.  I am trying to wean myself off convenient but optically compromised zooms and get back to basics.  Maybe one day I will be dust off the enlarger (still in its box in the loft) and return to the creative joys of the darkroom :-).

Update:  Since writing the above, my attitude to cameras has changed once again.  I was seduced by a longer lens for the D600 which meant the full kit became inconvenient to lug about.  As an occasional alternative I acquired a Fuji X100s which, as it turns out, I use nearly all the time.  A fixed prime lens, classic design, intuitive controls and a remarkable sensor – it is everything I need and accounts for 95% of all the images I take.

To this I have now added a GoPro Hero 4 Silver which will be used as both a dash and helmet cam … and ultimately from a drone.