I imagine this blackhouse belonging to Aunt Julia, she was buckets and water flouncing into them, she was winds pouring wetly round house-ends.  I keep bumping into her, this time in the prologue to Robert MacFarlane’s LandMarks – The Poet Norman MacCaig commended the ‘seagull voice’ of his Aunt Julia, who lived her long life on the Isle of Harris, so embedded in her terrain that she came to think with and speak in its creatures and climate.

In truth, this blackhouse is on the western coast of North Uist, a place Aunt Julia conceivably never visited, so embedded was she on Harris.  I would never leave either, not with a challenging 9 holes nearby. On the road south to the ferry at Leverburgh, the Isle of Harris Golf Course at Scarista clings to the edge of the world, the pins straining against strong westerlies, the flags always horizontal.  My window of opportunity to play the course was blighted with hail storms and excessive winds – this image was taken the next day in a rush for the CalMac crossing to Berneray .  I must therefore return, there is much outstanding research for Golf in the Wild – Coming Home. 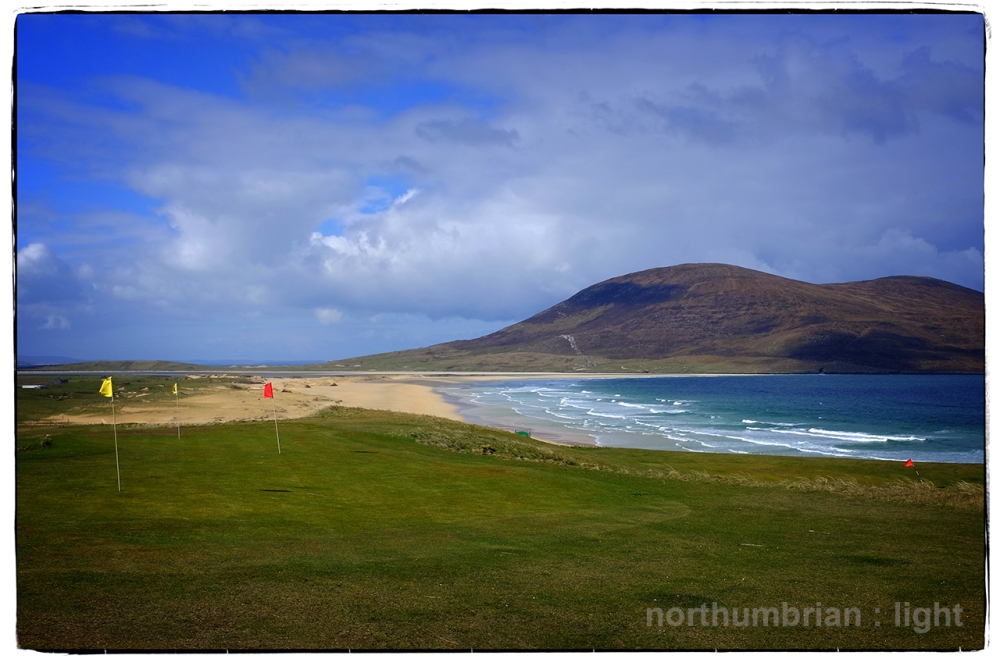 Following his defeat at Culloden on the 16th April 1746, Bonnie Prince Charlie and his companions headed north, attempting to cross from Skye to Eriskay at the southern tip of South Uist.  His boat was blown off course, landing at Eilean Glas on Scalpay on 30th April where he stayed for four days at the farmhouse of tacksman, Donald Campbell.

Campbell’s farmhouse was demolished in the 1870s and a larger dwelling built on the foundations. The house was at one time a shop, later a manse, and is now home to the Two Harbours guest house, our lodgings for two nights in April. This is the view that the Bonnie Prince would have seen from the farmhouse bedroom window; I suspect not much changed since 1746 – if I were him, I would have stayed longer:

The day after we arrived we did the Prince’s walk in reverse, taking the Out End road to Kennavay and then the rough track across open moorland to Eilean Glas. In doing so, we were also following in the tracks of Norman MacCaig – these lines from his poem Return to Scalpay:

… We walk the Out End road (no need to invoke
That troublemaker, Memory, she’s everywhere)
To Laggandoan, greeted all the way –
My city eyeballs prickle; it’s hard to bear
With such affection and such gaiety.

Scalpay revisited? – more than Scalpay. I
Have no defence,
For half my thought and half my blood is Scalpay …

This is a wild and glorious landscape and I will publish it’s more attractive side later but Eilean Glas is a sad place – abandoned and forlorn, only the lighthouse tower is pristine, in stark contrast to the surrounding structures.  There is evidence of various failed endeavours, whilst a sign on one window declares, optimistically, the buildings are in the process of renovation: 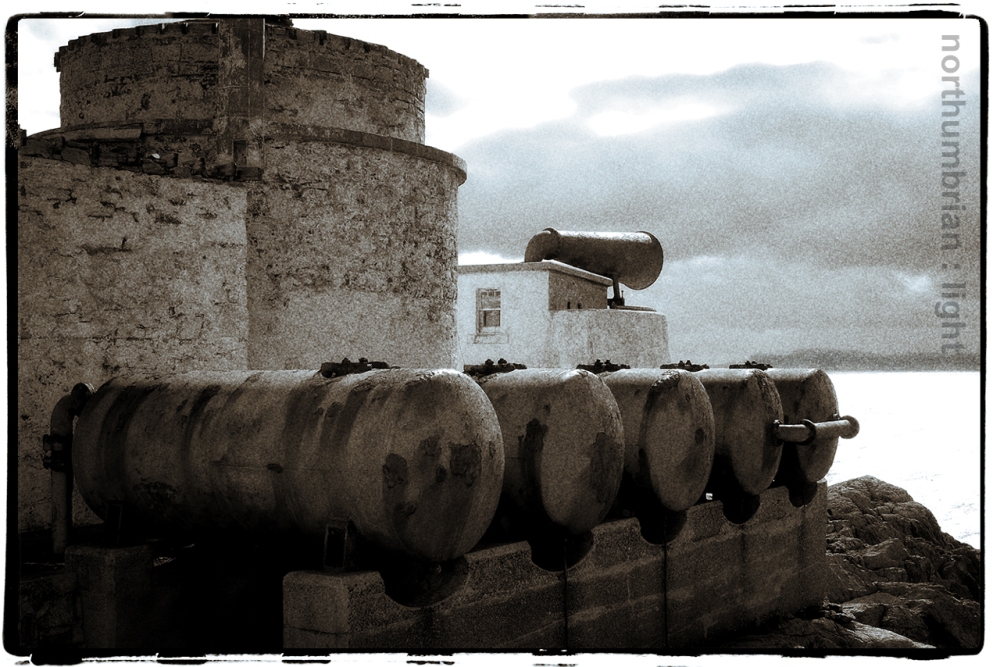 I have been off WordPress for some time so apologies for the many posts I have missed.

We have been hidden beneath a blanket of damp misty days, not a breath of wind to ease the leaves from the trees.  Then, this afternoon the skies cleared, a wind rose from the west and they fell like rain on the lanes that run up the hill to Hadrian’s Wall.  We were fortunate to be out in this brief respite, the camera set to emulate the slightly saturated world of Fujifilm Velvia: 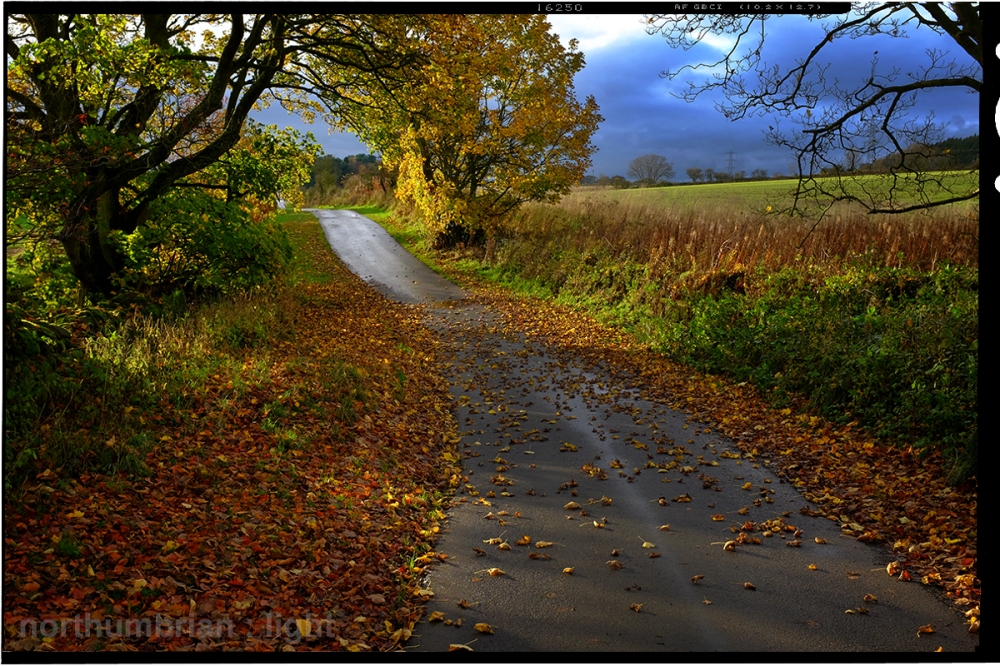 Wanting to go,
all the leaves want to go
though they have achieved
their kingly robes.

Over the turbulence of the world
flies the bird that stands for memory.
No bird flies faster than this one,
dearer to me
than the dove was to Noah – though it brings back
sometimes an olive branch, sometimes
a thorny twig without blossoms.

Some photographic memories from an unsettling week: 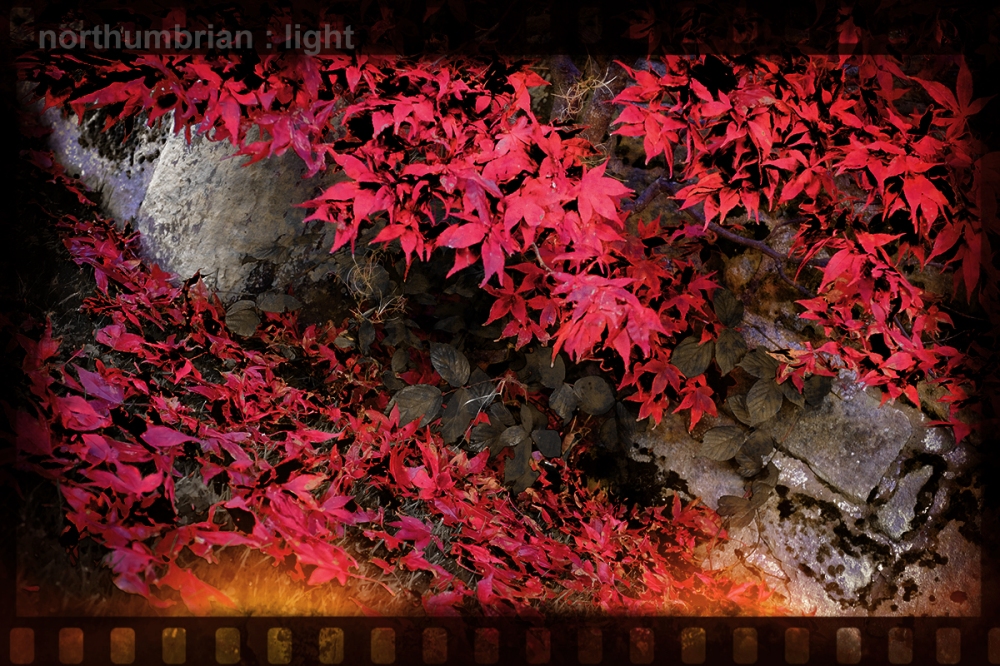 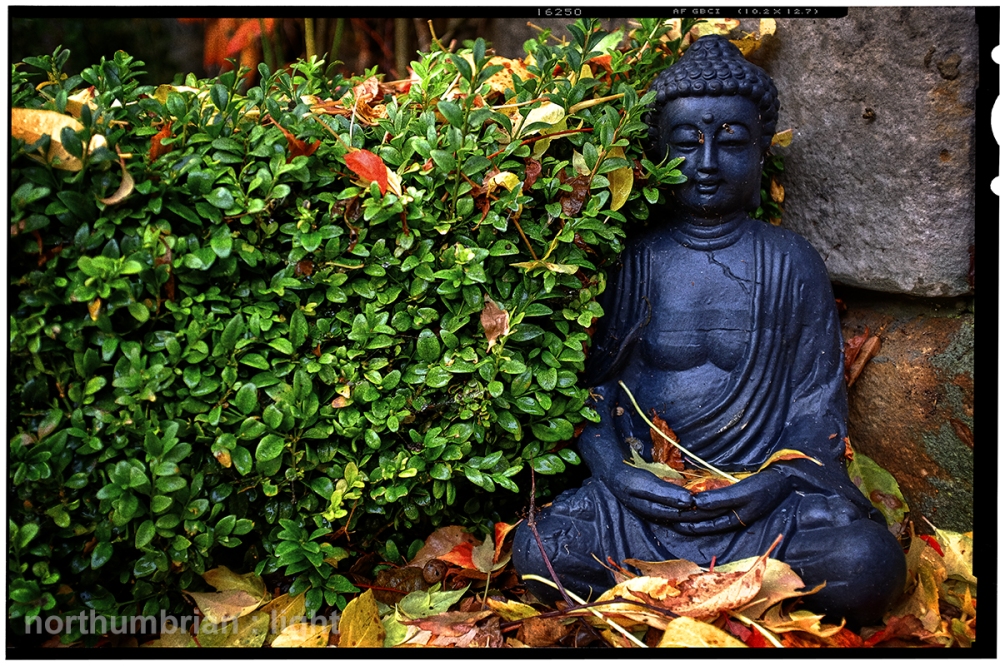 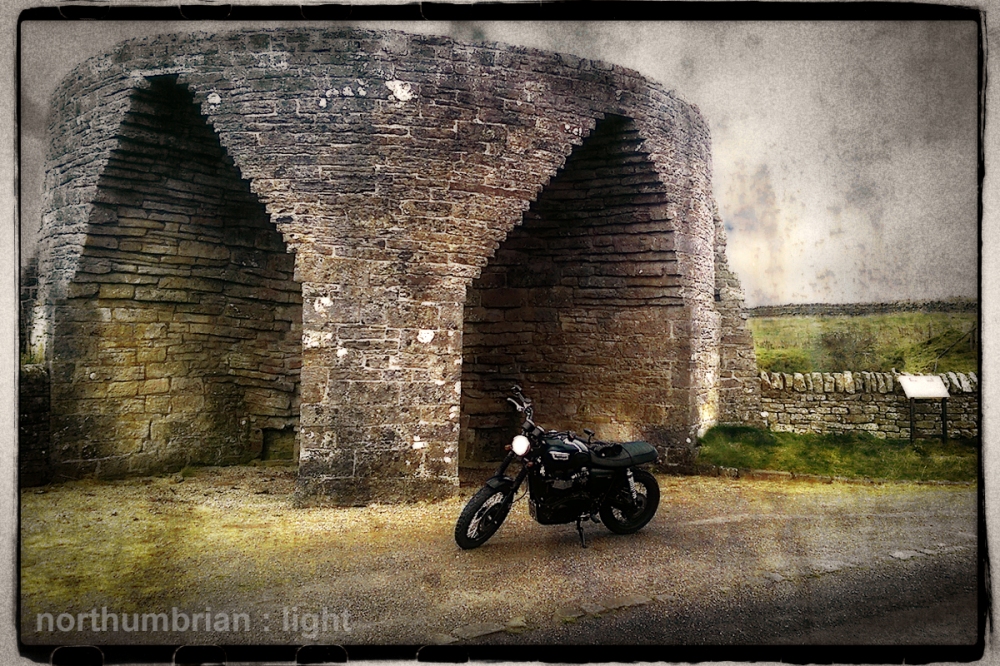 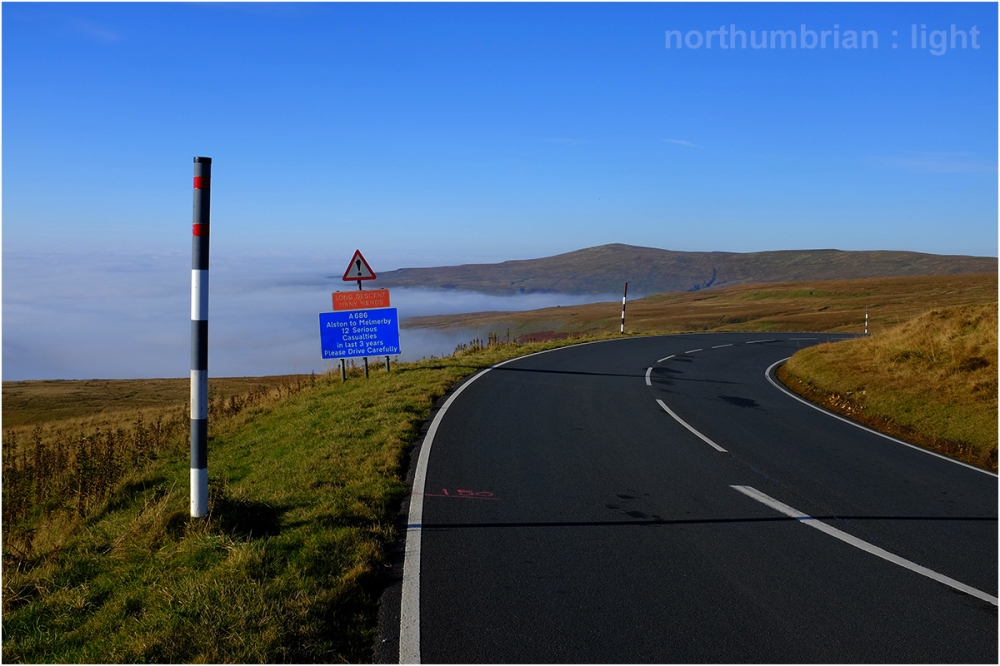 These waters are never still.  The perpetual motion of the tides carries drowned sailors south from Cape Wrath to rest on the shores of haunted Sandwood Bay.

I think of Lycidas drowned
in Milton’s mind.
How elegantly he died. How langourously
he moved
in those baroque currents. No doubt
sea nymphs wavered round him
in melodious welcome.

And I think of Roddy drowned
Off Cape Wrath, gulping
fistfuls of salt, eyes bursting, limbs thrashing
the ponderous green. – No elegance here,
nor in the silent welcome
of conger and dogfish and crab. 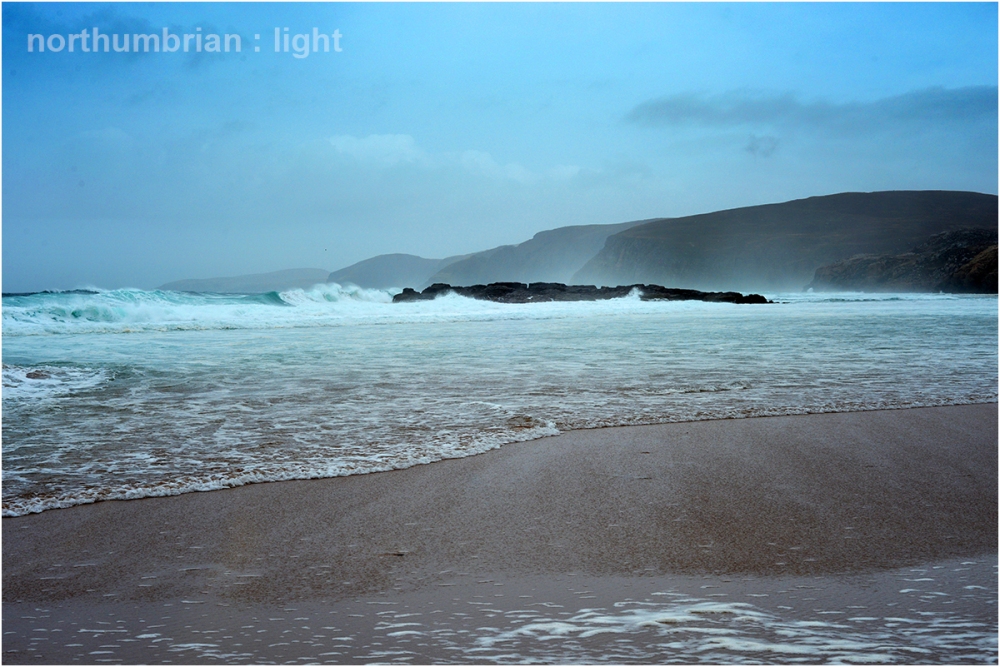 There is no direct connection between the image, the music and the poetry other than I became aware of them over the last forty eight hours.  The picture is from a walk to the aptly named Crow Wood near Newbrough on the southern Tyne.  The music was brought to my attention by my eldest son, Patrick – @smallhours2 – it pays to take notice of junior. The poetry is an extract from Norman MacCaig’s Close-ups of Summer – I am slowly working through his entire works. Poetry should not be rushed:

Hens sloven. But the cock
struts by – one can almost see
the tiny set of bagpipes
he’s sure he’s playing

The sun’s the same – pipemajoring
across space, where the invisible judges
sit, wrapped in their knowledge,
taking terrible notes 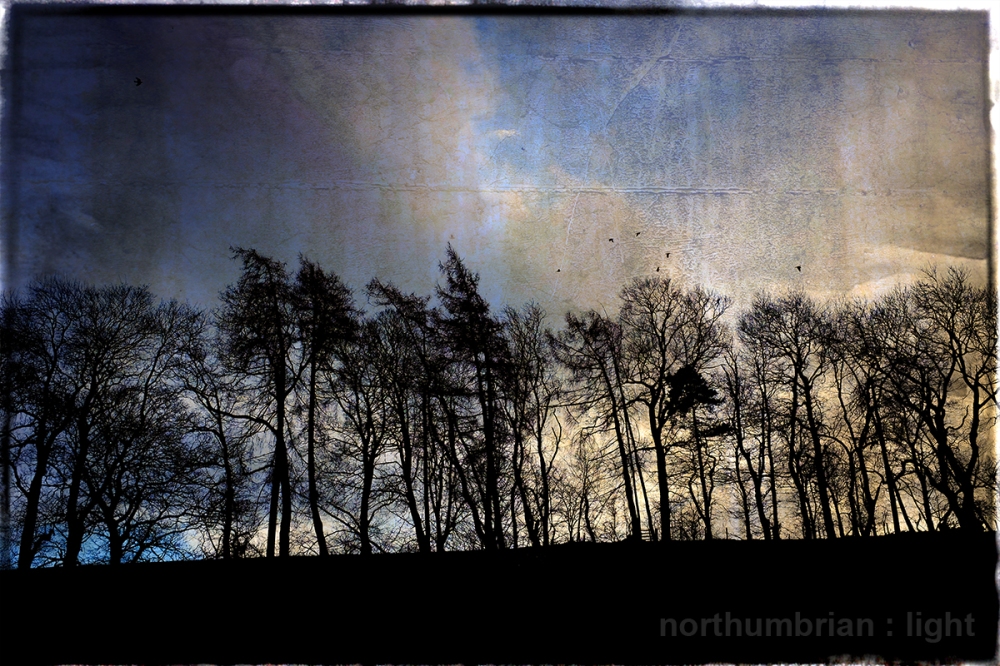 This is all a reward for keeping the mind open to new things.
(click on the image to enlarge)

There are spaces still to be filled
before the map is completed –
though these days it’s only
in the explored territories
that men write, sadly,
Here live monsters. 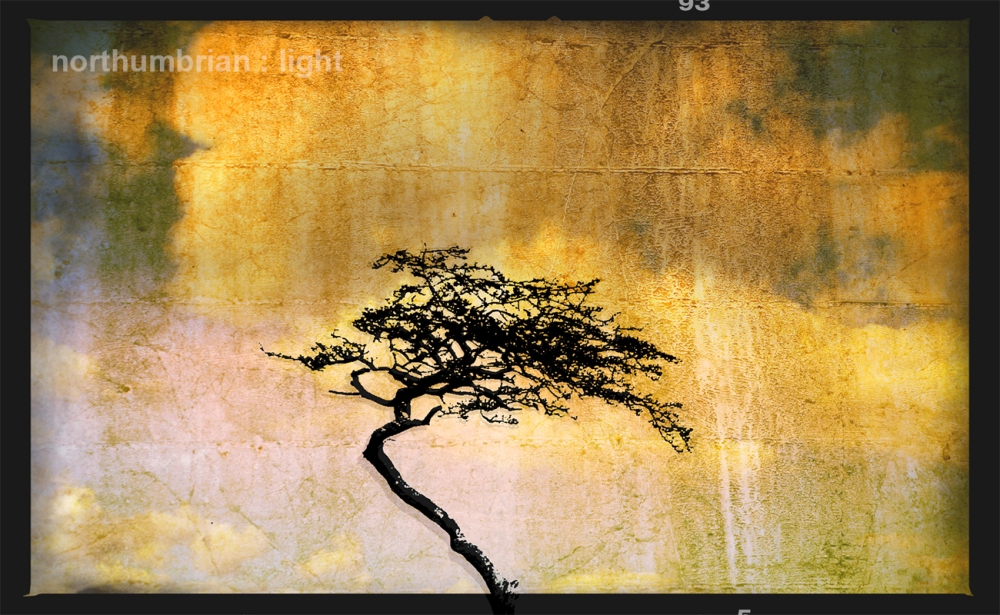 Just an evening amble up the lane from Beaufront Woodhead towards Hadrian’s Wall, that demilitarized zone between Hexham and the empty uplands of Northumberland.  The skies were clear, the light sharp and the fields gold. Far up, a hawk fluttered on the hot rising air:

I bend my stone arm up till the hawk
hovering over the hayfield
perches fluttering
on my wrist.
Norman MacCaig

As you travel the English canal system there are bridges everywhere.  Rail bridges, cobbled bridges, footbridges, motorway bridges, winding bridges that allowed horse drawn narrowboats to swap towpath sides without unhitching, viaducts, aqueducts over canals, roads and rivers and on the Bridgewater even a swing aqueduct over a ship canal.  And when you see the bridges there are suddenly two as they stand on their watery heads (Norman MacCaig).

These were taken on the Birmingham Canal Navigations one wintery Spring long ago: 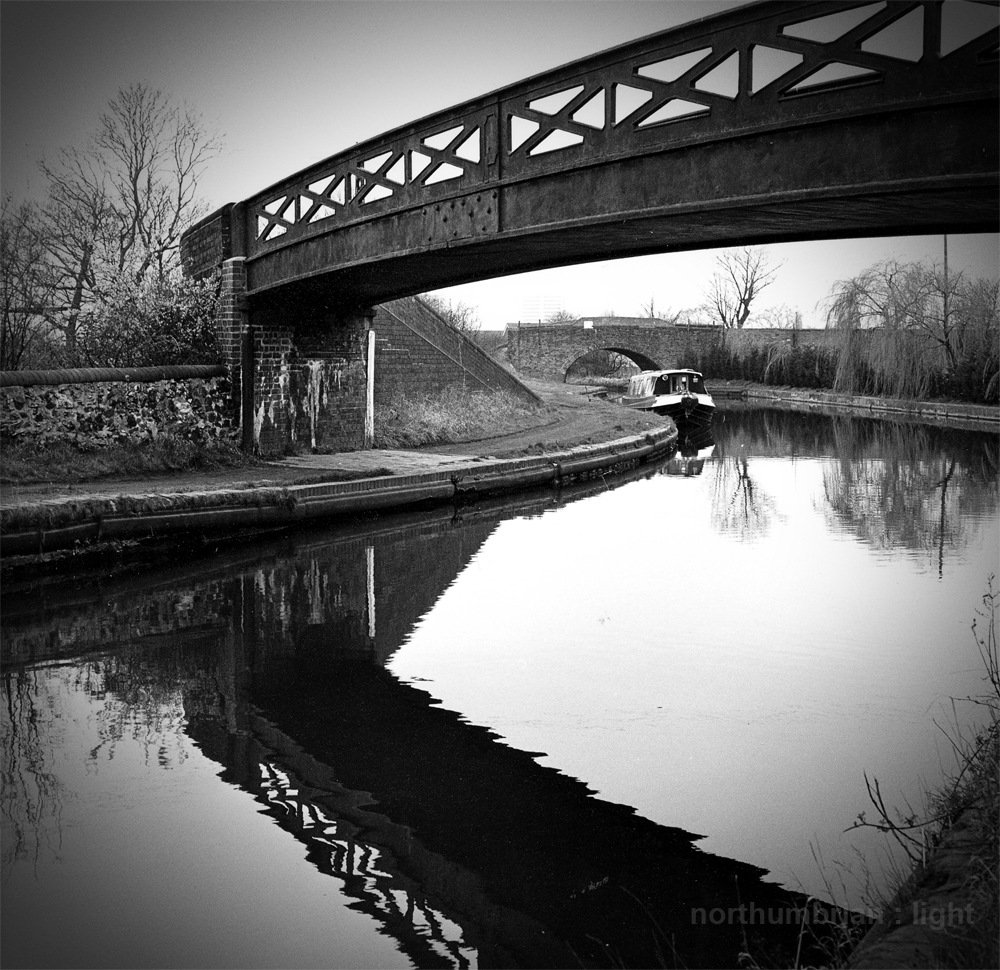 And if you ever fly over Spaghetti Junction in Bimingham and wonder what might be going on below – here you are:

This is not meant to be a ‘lazy post’, I just couldn’t resist sharing this masterpiece by Australian Astrophotographer Mark Gee.  Of course we went there and hopefully one day we will return to this “loveless” place:

It’s hard to think that the earth is one –
This poor sad bearer of wars and disasters
Rolls-Roycing round the sun with its load of gangsters,
Attended only by the loveless moon.

From Stars and Planets – Norman MacCaig