… do you call this!  From nowhere my mum came back to life this week when these words rang out from my PC speakers – ‘What time do you call this’ was the constant refrain of my upbringing.  It started with my elder sister who was subjected to this interrogation every Friday and Saturday night throughout her teenage years. As the irritating (much) younger brother I took quiet delight in her scolding, little realising that I would be subjected to deeper hot water when my time came. The price of schadenfreude.

My teenage reaction was ‘how can parents be so unreasonable, were they never young, were they never just a little wild and carefree!’  And the answer for my mother’s generation is, almost certainly not.  Only just sixteen when war broke out, mum was married with a one-year-old by the time of VE Day, seventy years ago yesterday.

The picture was taken by my dad somewhere in the Lake District in 1942 – a few days escape from fear and conflict. 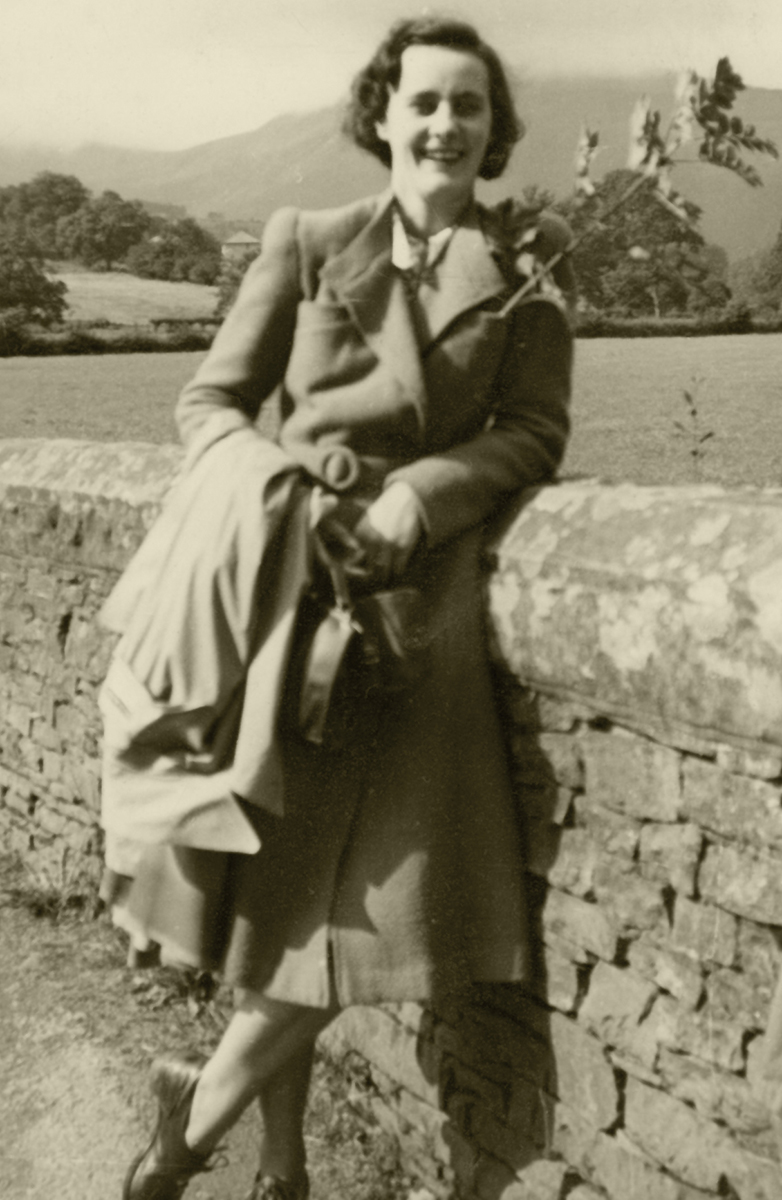 The context of the lyrics is not right but the repetition of the phrase is perfect. I have seen no reviews but a film that also features The National on the soundtrack at least has to be good to listen to:

“New York Morning” lays out his embrace of the city he describes as “the modern Rome, where folk are nice to Yoko”.

“That comes from John Lennon,” he explains. “In his last press conference when he left England for good, he said: ‘Why wouldn’t you go to New York? Every nation on Earth represented, all getting along – it’s the modern Rome’. Then he said: ‘Besides, they’re nice to Yoko’. Quite aside from what people think, whether she was responsible or not for splitting up The Beatles – and I’m very sure she wasn’t, knowing band dynamics as I do – it was the out-and-out racism that accompanied that, so when New York clutched them to its bosom as icons, they were very flattered, and it was the place where they felt they could live together and be happy. They were never far from my thoughts when I arrived in New York, being a Northerner and a musician. Knowing the love he had for his roots, it must have been very difficult for him to transplant himself, knowing he was a national hero.” 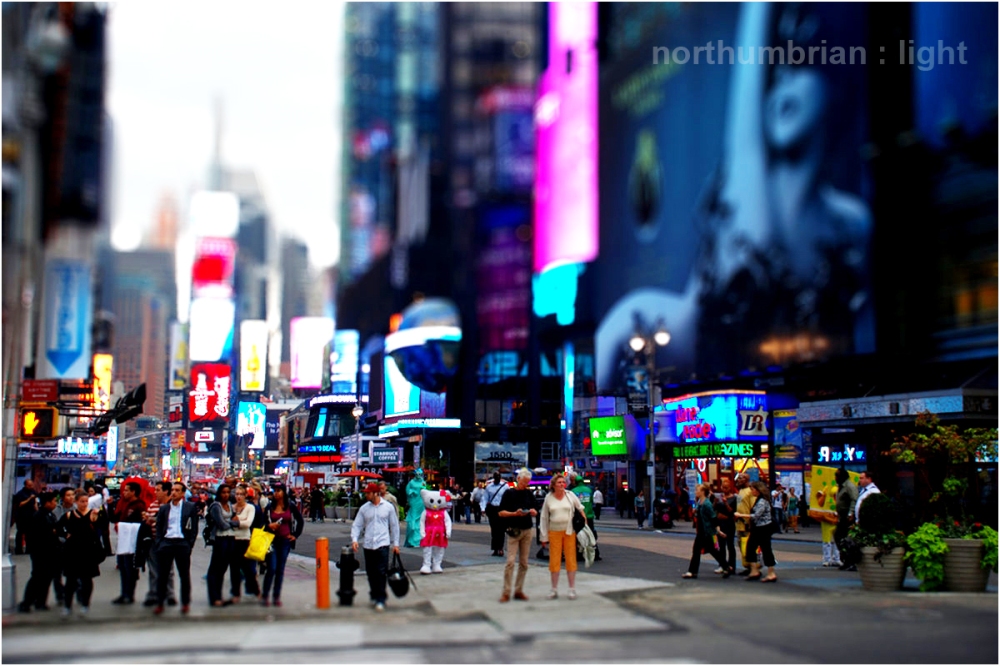 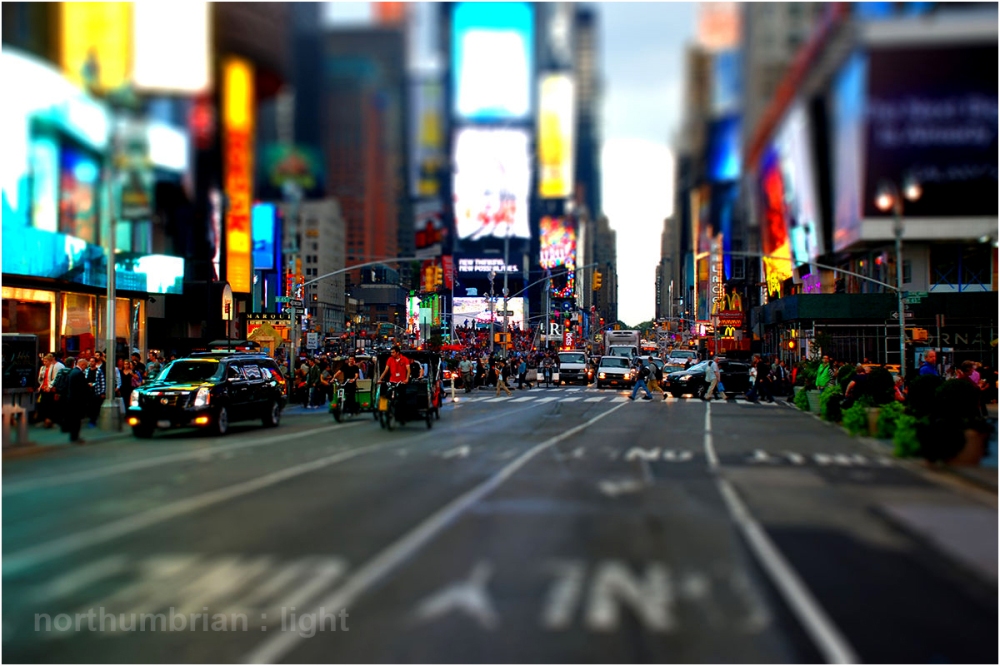 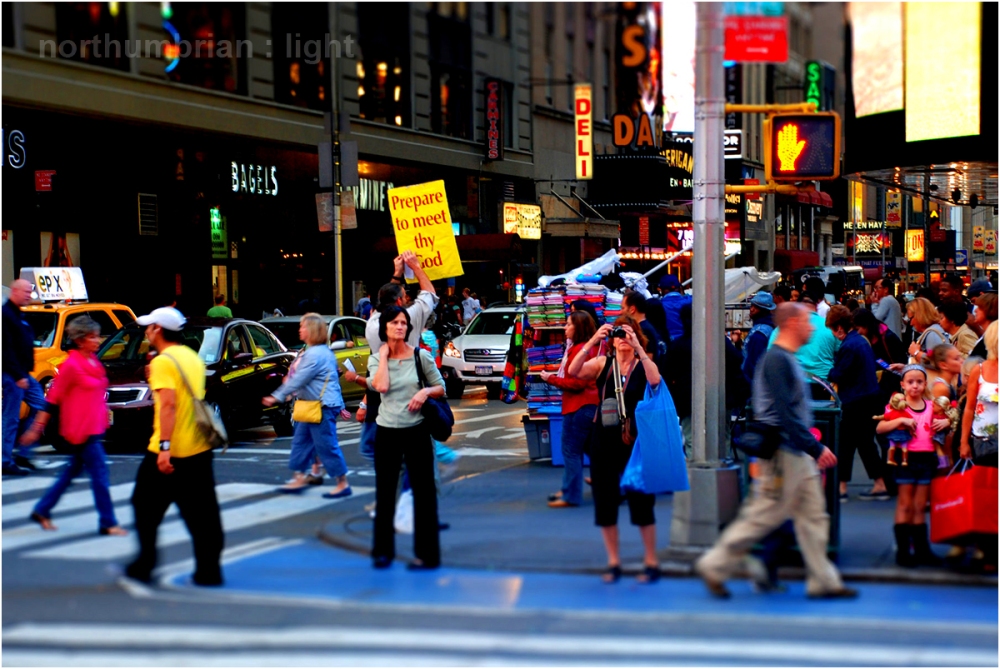 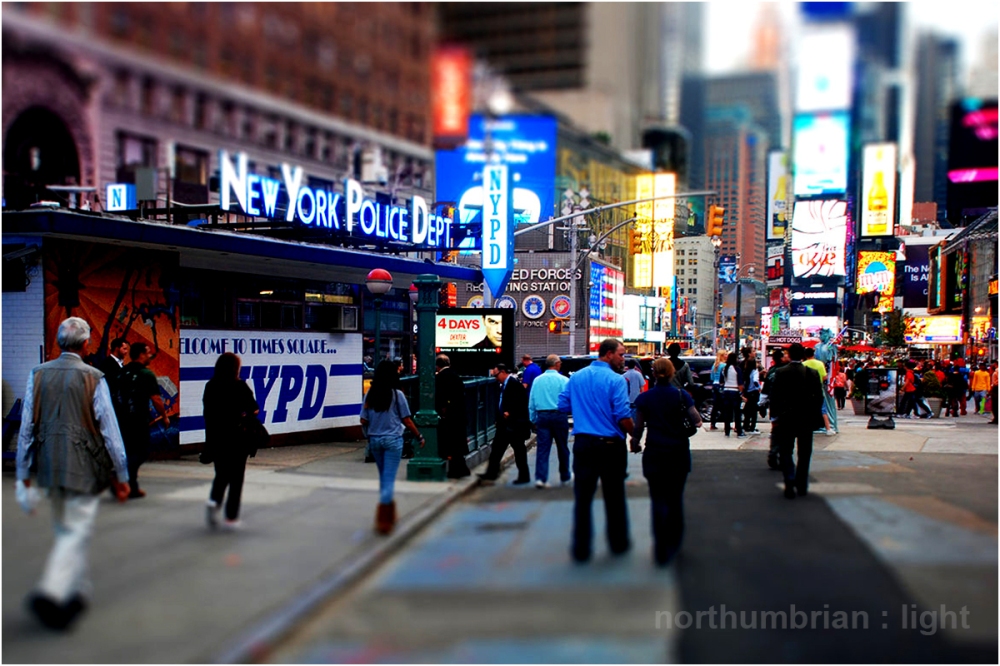 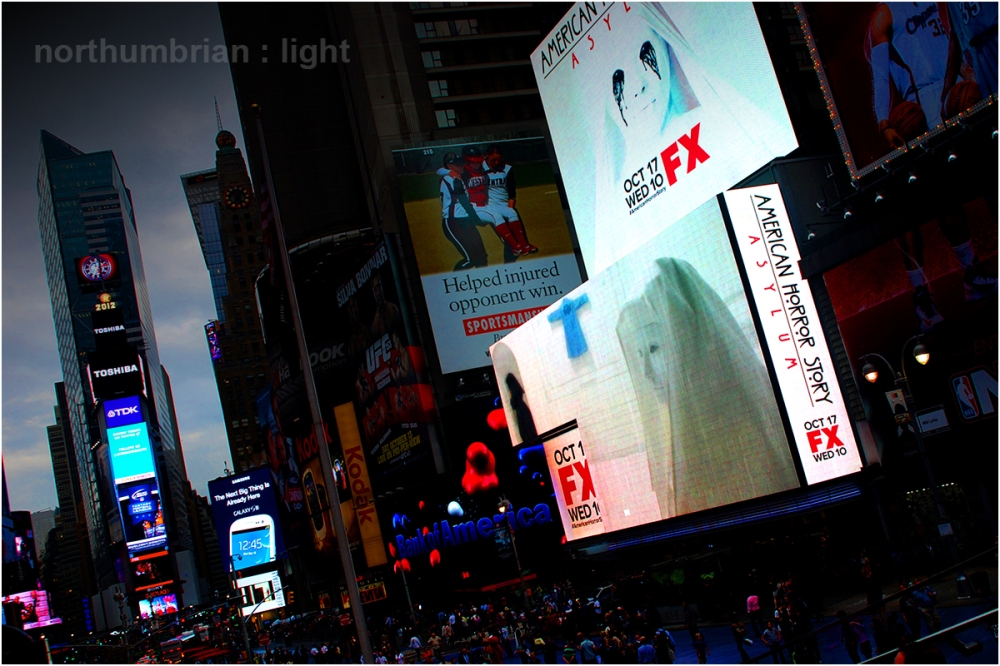 In Garvey’s case, of course, it wasn’t so much a national hero and international icon exchanging one form of attention for another, as an escape from attention into blessed anonymity. Whereas John and Yoko relocated to Manhattan, he settled into the more localised, bohemian surroundings of Brooklyn, exulting in the chance to make friends purely on his personality.

“I enjoyed hanging round these diners, which very much reminded me of the places in Manchester where I decided to do what I did with my life, where everybody’s a writer or a sculptor or a painter, and holding down a job in order to support that,” he says. “I enjoyed being that nice older English guy who comes in every day, like Ralph Richardson in the corner on his laptop! It also made me realise how much more inaccessible that youthful verve becomes as you get older. I prefer the company of one good friend these days, whereas these kids were very much about discovering their identity and showing it to the world. It was a lovely thing to witness.”

I have been sat too long at the keyboard again this week so I became determined to take some ‘exercise’. This is not exercise in the conventional sense as it involves playing around in the garage, my second home. To be precise I am cleaning underneath the arches, the bits of the beloved that nobody sees; this is an annual ritual.  Emerging from the garage into the light, I chanced to look up and see this cloud formation above the trees. It reminds me of The Outer Limits – to be precise Series 1, Episode 4, The Man with the Power. A man’s anger is transformed into a menacing cloud which ultimately wreaks vengeance upon the subject of his resentment. This line of cloud looks like it might become something else – like I say, I have been at the keyboard too long in recent weeks. (best to click on the image to enlarge as the tree looks very fuzzy in its compressed state). 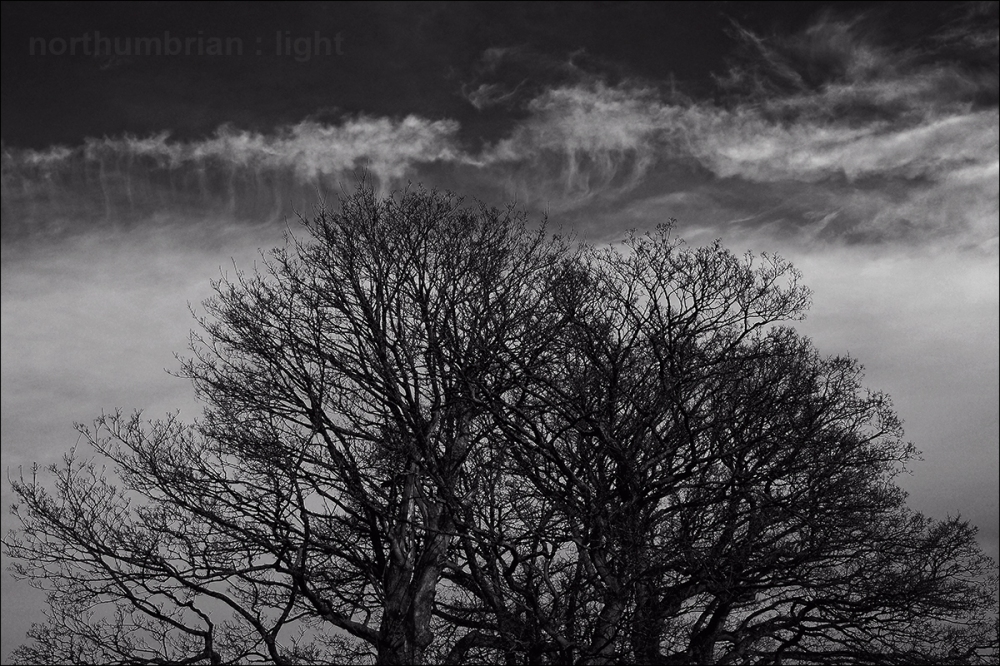 It is that dead time of the year in the northern hemisphere. This morning the temperatures have risen but the rain and heavy clouds have returned. One way of alleviating the winter blues is to plan adventures for the rest of the year – I am Googling around planning three at the moment. And then, a tweet from Craig Potter announces a new Elbow video. Album #6 cannot be far behind – suddenly, there is a spring in my step:

Some unexpected connections: my sister lives near Great Missenden in Buckinghamshire; in the High Street there is the Roald Dahl Museum and Story Centre, the home of the children’s and short story writer for 36 years until his death in 1990.

Tales of the Unexpected was a television series that ran between 1979 and 1988.  The title and the initial run of episodes was based on a collection of short stories by Dahl.  The prologue to his official biography is entitled Lunch with Igor Stravinsky: “Biographers were dreary fact-collectors, he argued, unimaginative people, whose books were usually as enervating as the lives of their subjects. With a glint in his eye, he told me that many of the most exceptional writers he had encountered in his life had been unexceptional as human beings. Norman Mailer, Evelyn Waugh, Thomas Mann and Dr. Seuss were, I recall, each dismissed with a wave of his large hand, as tiresome, vain, dreary or insufferable. He knew I loved music and perhaps that was why he also mentioned Stravinsky. “An authentic genius as a composer,” he declared, throwing back his head with a chuckle, “but otherwise quite ordinary.” He had once had lunch with him, he added, so therefore he spoke from experience”.

Stravinsky was a cosmopolitan composer emigrating from Russia, to Switzerland, France and the US, dying in New York City in 1971.  In accordance with his wishes, he was buried in the Russian corner of the cemetery of Isola di San Michele, Venice.  Knowing nothing of this at the time, it was a surprise to find him at rest in the late-afternoon winter shadows on this island of the dead. Flowers adorned his grave but their fragrance had long since faded: 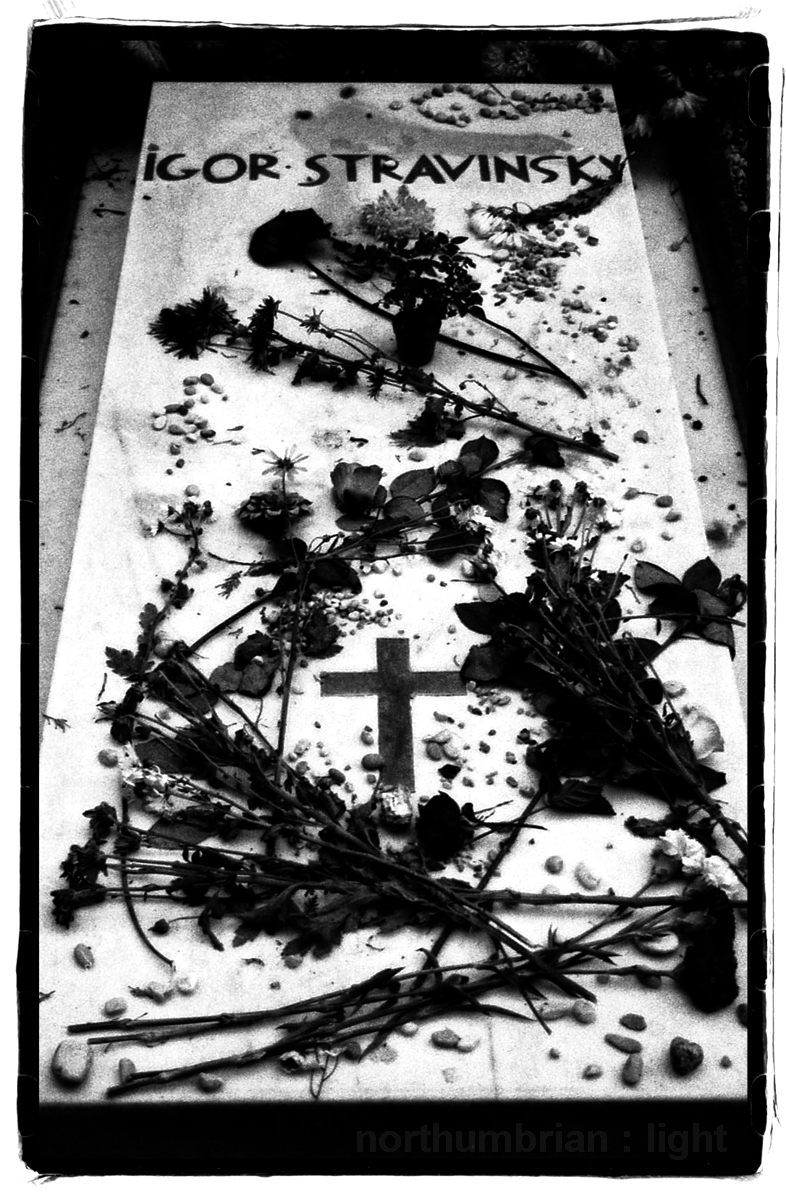 There are other unexpected treasures in this vast cemetery but it does not pay to get too distracted – you would not wish to miss your last bus home: 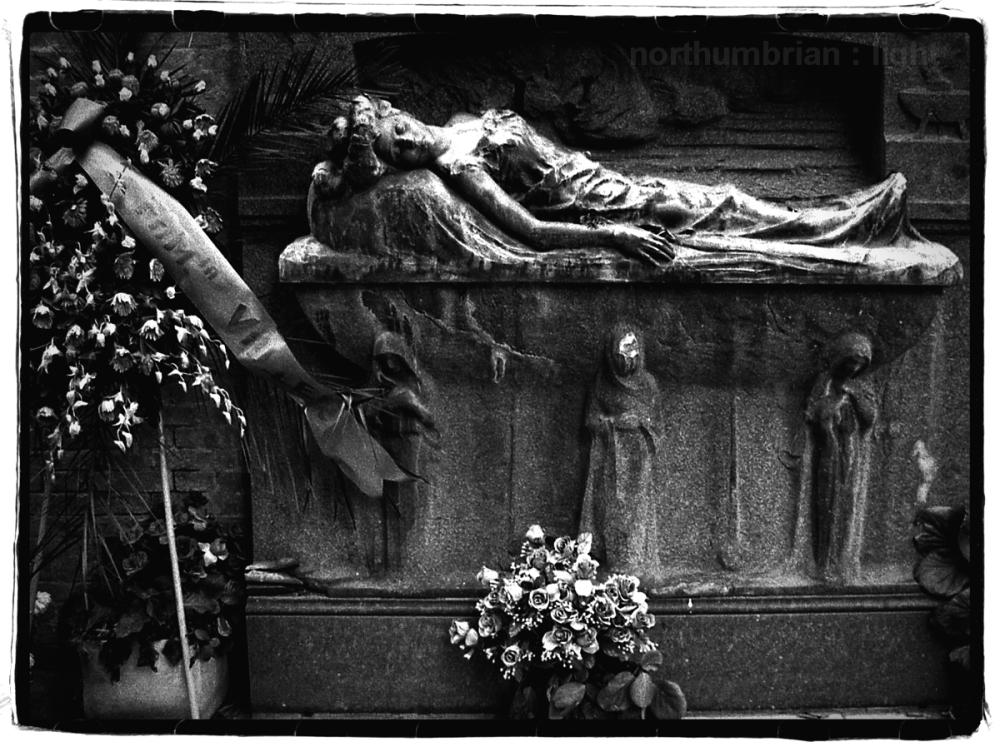 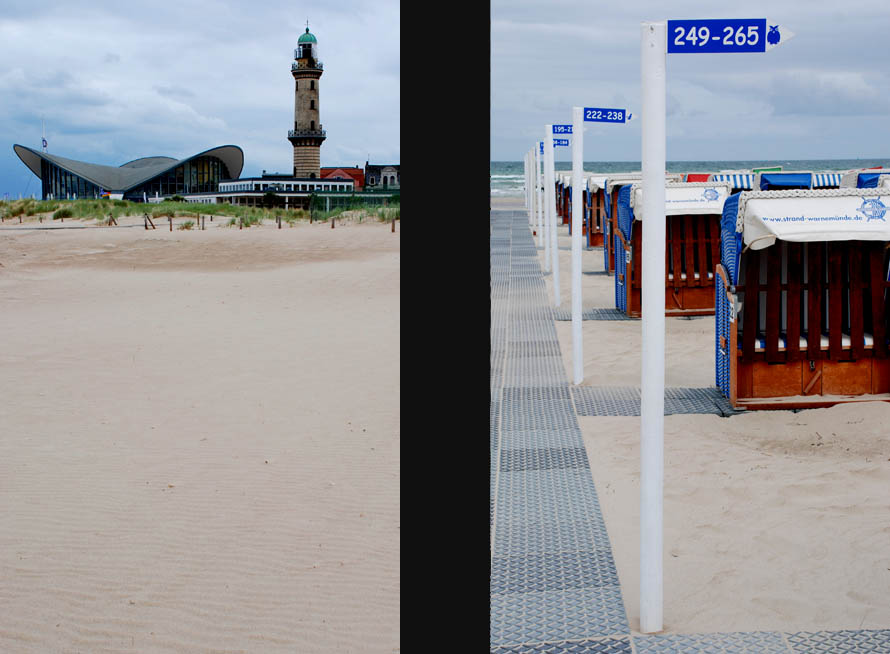 The soft white sands stretch along a broad windswept beach for nearly two miles.  Empty numbered basket chairs are arranged in neat little rows, facing away from the sea and prevailing winds, they seem designed for eavesdropping.  Nevertheless, first  impressions can be misleading.  Beneath the lighthouse sits the Teepott (Teapot). This thoroughly modern sculpted building looks post-unification but was actually constructed in 1960.  Administrations and appearances can be deceptive.

Margaret Leigh writing in 1941 (Driftwood and Tangle) of a disappearing life in the Scottish Highlands describes a burial-ground with its freight of memories and prayers slowly sinking into darkness.  These are communities which  died of natural causes brought on by progress; by contrast the disappearance of many similar communities across Europe was hastened by war and its aftermath.