Bertie: A Life of Edward VII by Jane Ridley has been recently published to favourable reviews – A. N. Wilson in the Spectator describes it as profoundly learned and a cracking good read.  Bertie was a man with outsized appetites and an “elephantine” waistline, 48 inches by the time he came to the throne, aged 59;  by modern standards, quite a trim figure.  He succeeded Queen Victoria in 1901 and showed an “instinctive knack” for modern kingship, founding hospitals for the poor, reviving ancient ceremonies such as the State Opening of Parliament and establishing new honours for the arts and sciences.  When he died in 1910 the Royal Family was “glamorous and relevant again” and judging by the words on this postcard, popular with his subjects.

This is another from my great uncle Charlie’s postcard collection and unusually it contains a topical reference.   Edward VII suffered a series of heart attacks which culminated in his death at Sandringham on May 6th, 1910.  As mentioned in the postcard, he lay in state at Westminster Hall until his funeral on May 20th. 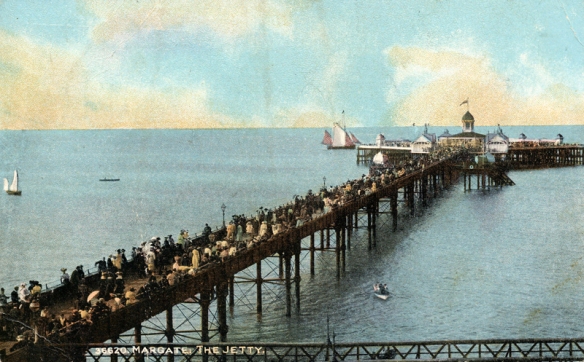 D.C. Many thanks for pretty P.P.Card and glad you arrived home safe and hope you are well & quite settled again.  Bob & Ship was at Margate so I went for the day last Sun weekend and had a good time.  Miss A & I saw the Lying in State of the poor King at Westminster Hall and Miss M gave us a lovely seat & saw the funeral procession.  It was a lovely day & such a sight I shall never forget .  I was sorry you could not stop and see it.  Louie as left couldent do without you Lou.  I hope D is alright & had a letter from E & is getting on fine.
With Kind Regards from A H & all the rest.

The card is addressed to Charlie at the family home in Longparish, near Andover.  Gavelacre was a farm with a mansion house where his father, William, was employed as a gamekeeper.  I guess “A H & all the rest” are the other servants at Montague Square and it would seem that Charlie has temporarily returned home thus missing the state occasion.  In an earlier post I made the assumption that Charlie moved with the family from Montague Square to Phillimore Gardens but a simpler and more likely explanation is that he took up a new post with Sir Robert Finlay.  The reference to ‘Louie’ is pretty much indecipherable but assuming Charlie moved on, then doing without him must have become a necessity.  Judging by the comments on the cards he was obviously liked below stairs so what did he do to so upset the family.  I suspect I will never know.