This proud man is my great grandfather, Charles Benjamin Buscall Deaves (all forenames), my maternal grandfather’s father (1864-1937).  He is dressed in the uniform of the Andover Fire Brigade – Fireman No. 12; helmet, buckle and button shining, his hand rests upon his fireman’s axe.  I am certain this was taken in 1923; there is a group picture of the Fire Brigade in C J J Berry’s Old Andover – 340 pictures covering 120 years, published in 1976.  In the book, Charles is standing in front of a fire engine in identical uniform and pose, looking exactly the same age.  “Andoverians took great pride in their Fire Brigade which was under the direct control of the Borough Council.  For 33 years from 1903 to 1936, its highly respected commander as Capt. F.A. (Arthur) Beale, of Beale & Sons, the local builders and under him the Brigade had a fierce esprit de corps and excelled in efficiency and in competitive drills, winning dozens of trophies and diplomas”.

I imagine Fred and May calling at his father’s house just before he goes for the group photograph, May heavily pregnant with my mother, born in August 1923.  Charles’ wife Alathea (née Deaves): “Doesn’t your Dad look grand Fred, go on take his picture.  I can’t believe it, he will be sixty next year and then he is finished with the Brigade, my, doesn’t time fly.  There will be a vacancy coming up Fred, perhaps you could take his place when he retires – the extra money would come in handy now you’ve got May and the baby to think of “. 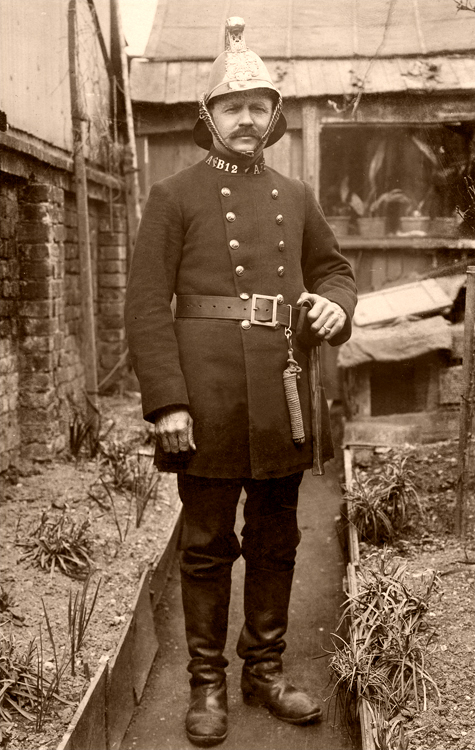 Sure enough, Fred’s 1966 obituary includes the following:  During World War II he was a full-time fire officer in the Andover Fire Brigade, having joined in 1925 and served until 1945.  He was called to help at the blitzes at Portsmouth and Southampton.  I am particularly fond of the picture below which at first glance appears to be just a bunch of ‘old boys’ gathered round some up-turned boxes drinking tea, maybe laced with something stronger; my grandfather, Fred, is seated second from the left.  Look more closely though and at least two are in the uniform of the Andover Fire Brigade (AFB badges) whilst one blackened individual looks fresh from an inferno.  On the far right of the picture, on the ground next to the bucket, is a rolled up fire hose.

Is this the morning after, have they just returned from war torn Plymouth or Southampton or has there been a more local tragedy.  C J J Berry’s book states that “A solid-tyred Dennis engine was bought in 1927 and converted to pneumatic tyres in December 1933” – Charles and Fred would have both been familiar with this machine.  “The first big fire it attended after conversion being that at the Heronry, Whitchurch, a country mansion blaze in which two died; the Duc de la Tremoille and Capt. the Hon. J.H.B. Rodney”.   The Andover Advertiser report on the fire includes this chilling detail:  The finding of the charred remains of Prince Louis Jean Marie de la Tremoille, premier Duke of France, was told by Supt. S. Bennett, of Andover.  The chauffeur, Jackson, said Capt. the Hon. J. H. B. Rodney, was apparently not seriously injured after his leap from the window, and it was a surprise that he died soon after admission to hospital.  It seems certain that Fred would have been in attendance that tragic night.

This final picture was taken at Andover Football Ground, sometime between 1941 and 1945.  Fred is standing on the front row, sixth from the left and the AFB badges have now been replaced by the NFS insignia – the National Fire Service.  This organisation was formed in 1941 by the amalgamation of the wartime national Auxiliary Fire Service (AFS) and the local authority fire brigades; Andover Fire Brigade was one of 1600 such local authority fire services.  Like his father before him, in this pictuire Fred is edging towards retirement from the Fire Service. 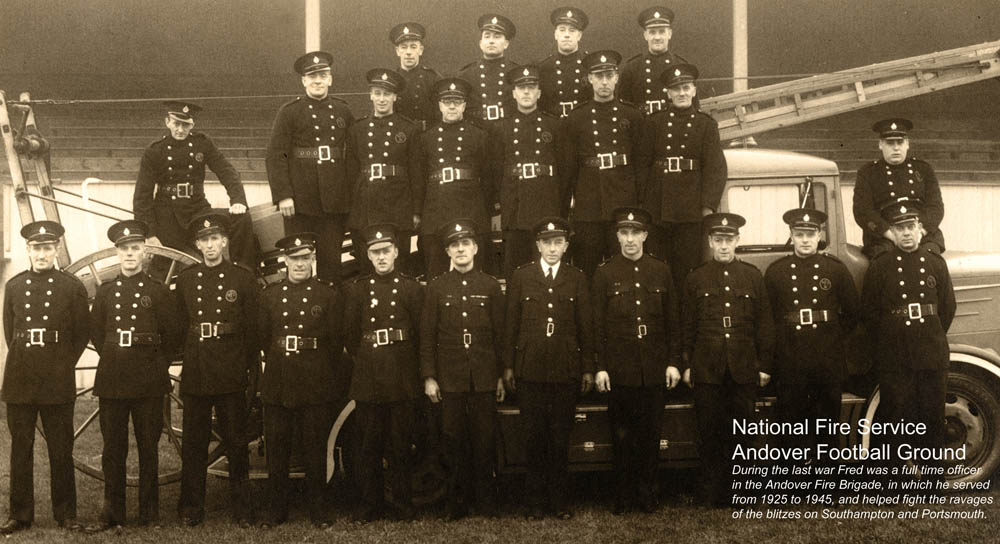 One final note worthy of an ‘anorak’: despite initial assumptions, the fire engine shown in the group photograph above is almost certainly grey and not red.  The white banding around the wheel arches is consistent with other vehicles painted in the standard grey livery.