… and the places they take me. As I type, the remnants of Hurricane Ophelia is juggling the tree tops and spreading leaves across empty Northumbrian fields.  The summer is long gone.  A daily photographic diary is a striking reminder of how the landscape changes from the lush greens of summer to an autumnal palette in the blink of an eye.  It is also a reminder of the places I have been when the sun was at its highest:

… the Scrambler, back at Crindledykes on new rubber – Michelin Anakees

… country roads, take me home – the Scrambler above Henshaw.

… to Carter Bar via Carlisle and Hawick – 134 miles 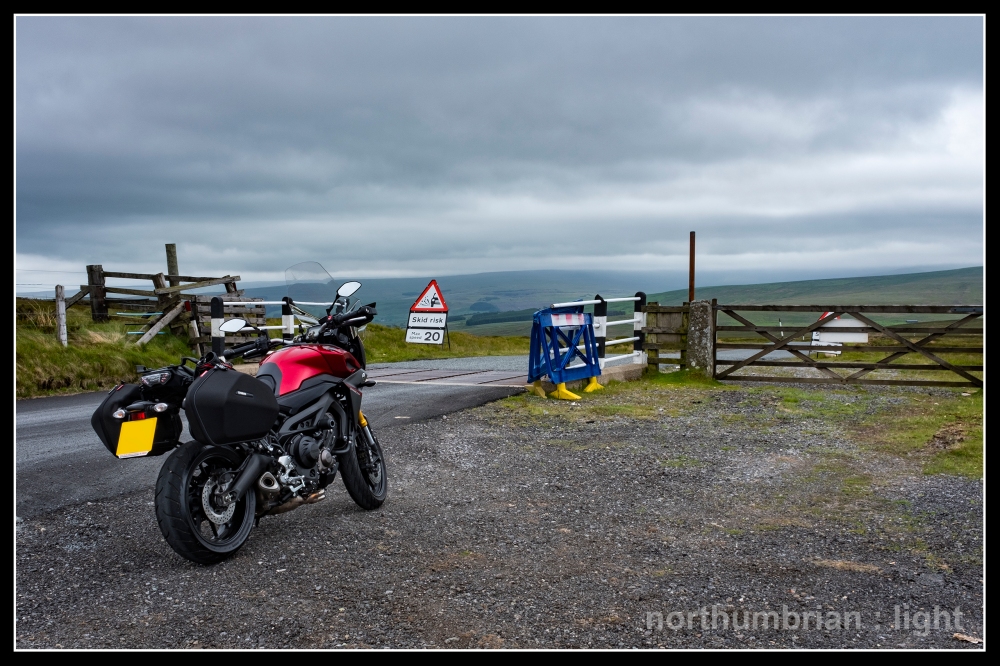 … Portobello, near Edinburgh – long ride on the Tracer to meet eldest son at The Beach House Cafe. 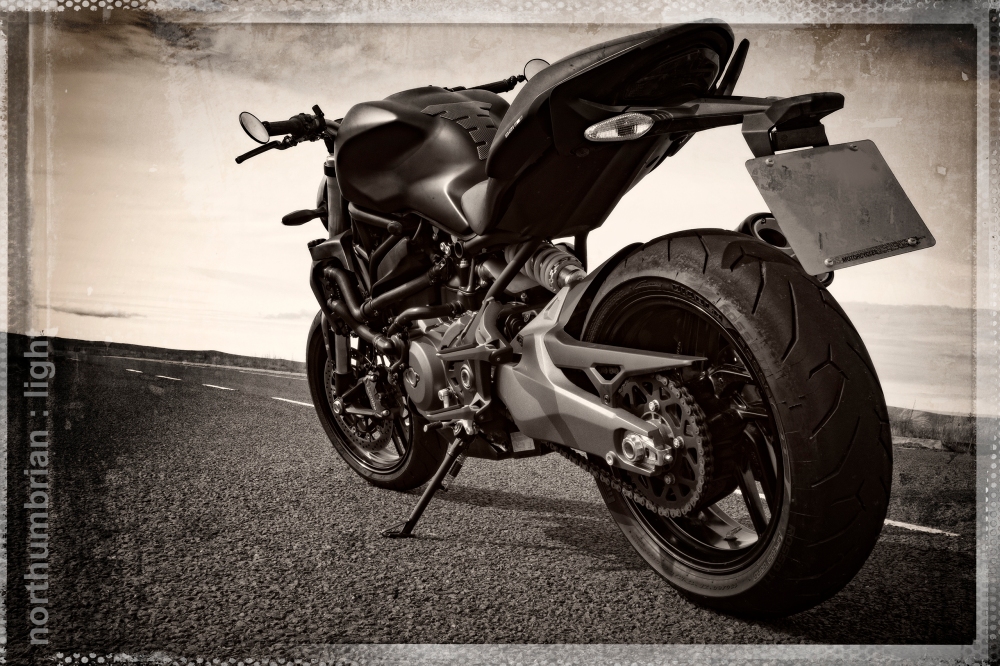 … The Monster of Plenmeller 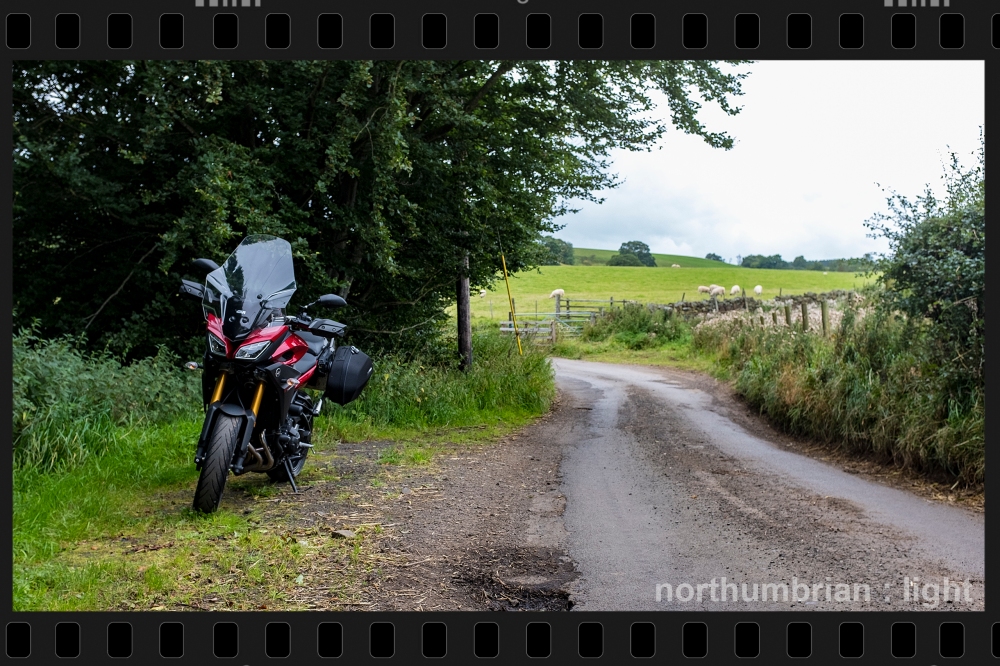 … back roads near Simonburn, Northumberland 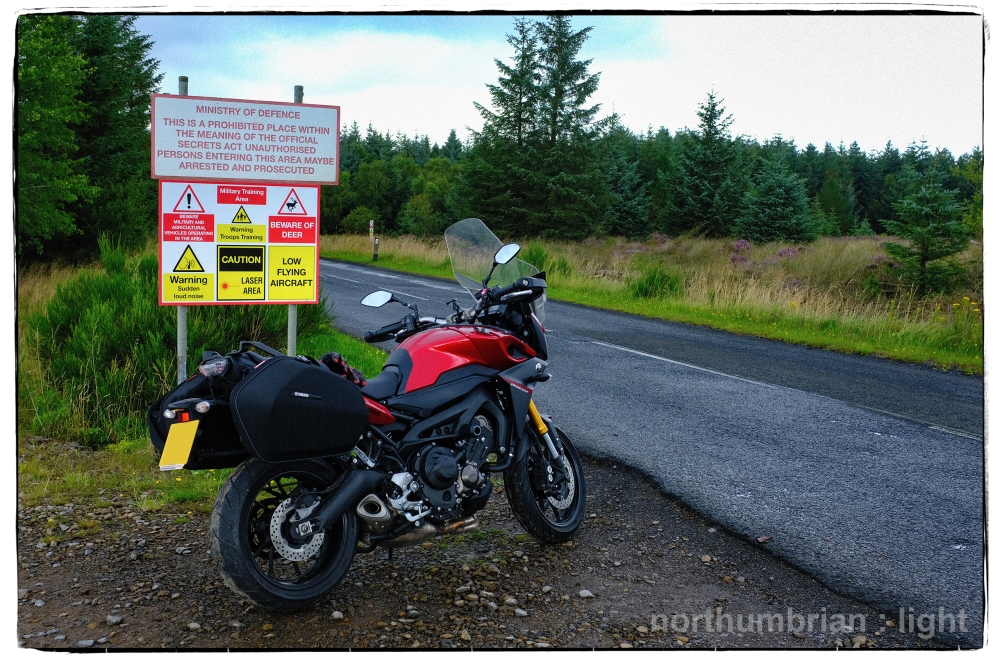 … Keep Out would be more succinct – RAF Spadeadam 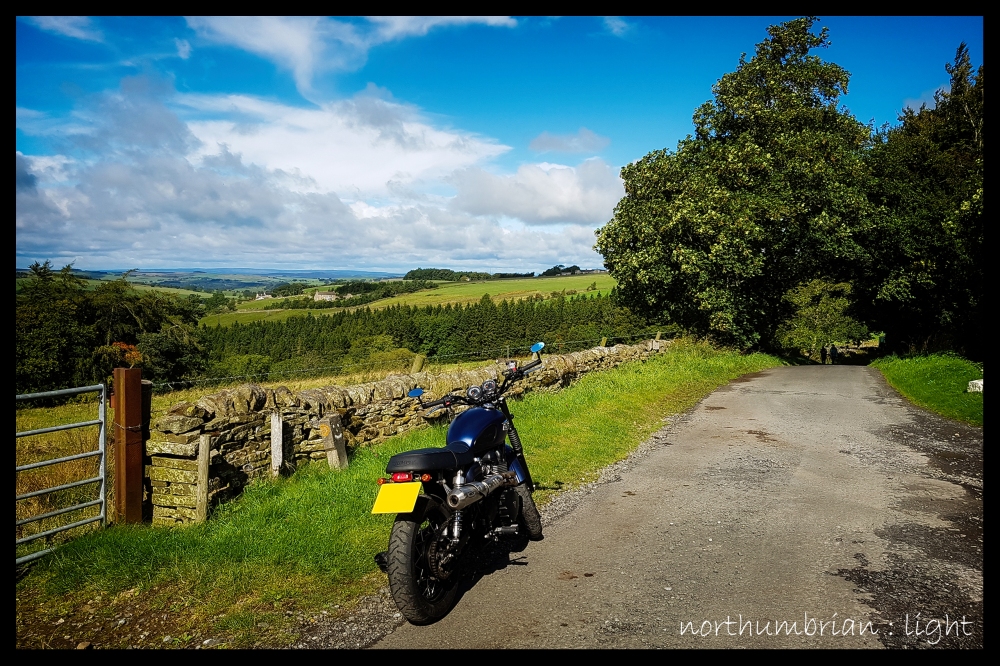 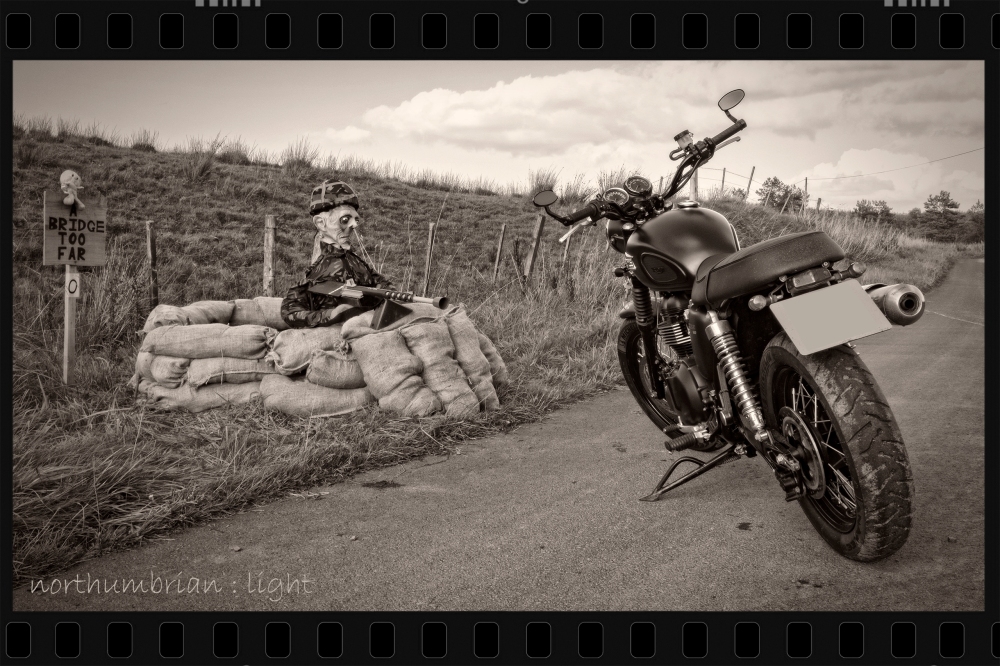 … A Bridge too Far meets The Great Escape – Whygate, near Stonehaugh

… Autumn, its light and colours, is arriving fast.

As the year turns, the bikes will spend longer in the garage, as will the golf clubs. It is time to make some serious progress on the sequel to Golf in the Wild – a bit like a 2nd LP, I am finding the follow-up much harder going 🙂

Northumberland has been clinging to the wreckage of autumn these last few weeks but its all over now.  Despite Black Friday, despite the ever sooner onset of Christmas and the tyranny of things, it has been a quiet few weeks in Beaufront Woodhead.  It is also a time of inner conflicts.  The desire to play golf set against too damp courses and uninviting weather – the solution – head for the coast. The impatient need to be out on two wheels set against slippery surfaces, biting winds and too much salt on the roads – the solution – sit tight and polish the hardware.

For now, the priority is the much delayed task of writing the follow-up to Golf in the Wild. My modest ambitions for the first version have been met – the production costs have been recovered and 800+ copies shipped.  The sequel is progressing at a glacial pace – I am currently researching Loch Eriboll, just a few miles down the road from the return journey’s place of departure, Durness. Eriboll has some fascinating history, not least that in May 1945, this was the location for the surrender of thirty three U-boats, the pride of Germany’s Wolfpack.  I could be stuck in these waters for weeks, but no matter, the days are short and the nights long.

In the meantime, this is Northumberland as autumn falls into winter:

… they are things born perhaps slightly before their time; when it’s not known if the environment is quite ready for them – Max Ackerman – one of the two primary characters in Nicholas Mosley’s book, Hopeful Monsters.

According to Wiki, the German geneticist Richard Goldschmidt (1878 – 1958) was the first scientist to use the term “hopeful monster”.  Goldschmidt believed the large changes in evolution were caused by macromutations (large mutations).  Some modern scientists have written that hopeful monsters are neither impossible nor should be seen as anti-Darwinian because, even if proven to exist, they would not replace the evidence for gradual evolution by mutation but supplement it. The early neo-Darwinian synthesis theorists had rejected hopeful monsters due to lack of evidence however, some now believe that Goldschmidt was not entirely wrong.

The author Nicholas Mosley is the half brother of Max Mosley and the eldest son of Sir Oswald Mosley, the English politician known principally as the founder of the British Union of Fascists, and his first wife, Lady Cynthia Mosley. Lady Cynthia died in 1933, and in 1936 Sir Oswald married Diana Mitford, in a ceremony in Germany attended by Joseph Goebbels and Adolf Hitler.  Monsters to a man.  Max was born in 1940.

In my teenage years, when my universe revolved around motor sport, I was keenly aware of Max Mosley’s racing exploits.  He competed nationally and internationally between 1966 and 1968 before retiring and becoming the M in March Engineering; he would eventually spend four terms as president of the FIA (Fédération Internationale de l’Automobile).

The FIM (Fédération Internationale de Motorcyclisme) is the two-wheeled equivalent of the FIA, acting as sanctioning body for the MotoGP World Championship and the overall governing body of motorcycling sport at a world level. It groups together 112 National Motorcycle Federations across six continents.

All of which brings me, in a roundabout fashion, to my new Monster. The 78.9 hp 696 variant had to go – physically too small (Bike magazine described it as a two thirds size motorcycle) it was playing havoc with my back and wrists. Enter the 112 hp 821 Ducati Monster Dark. This is more of a Darwinian evolution than a macromutation – it weighs more, mainly due to being water-cooled, but has much improved space for the rider.  It feels like you are sitting in the bike rather than over the bars – a disconcerting aspect of the 696.  Best of all, even with stock cans, it sounds like it has just escaped the underworld – I love it 🙂 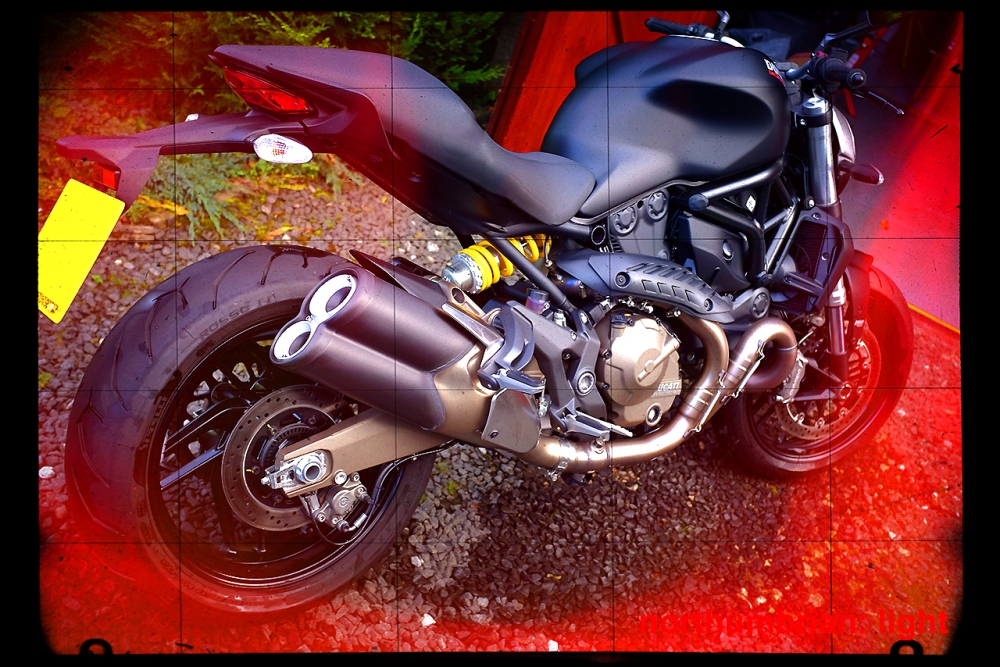 You don’t stop riding when you get old, you get old when you stop riding is the well known adage of the more mature rider.  There is no finer example than the 90 year old John Berger who not only still rides but has the descriptive skills to express what the rest of just feel:

… except for the protective gear you’re wearing, there’s nothing between you and the rest of the world. The air and the wind press directly on you. You are in the space through which you are travelling.  Your contact with the outside world is more intimate. You’re more conscious of the road surface, its subtle variations, its potholes, whether it’s dry or damp, of mud or gravel; you’re aware of the hold of the tyres, or their lack of it; bends produce another effect: if you enter one properly, it holds you in its arms. A hill points you to the sky. A descent lets you dive into it. Every contour line on the map of the country you are riding through means your axis of balance has changed…This perception is visual but also tactile and rhythmic. Often your body knows quicker than your mind.