The steam engine negative has been in my desk drawer for some months, awaiting a spare moment to scan.  I was not optimistic about the results, the 120 negative appeared over-exposed but, after fiddling with the levels in Photoshop, the positive image is better than I had expected.

I would have taken this on the family Kodak Brownie Cresta 120 roll film camera.  This Bakelite device with cream shutter release and film wind-on, captured our family history from the mid 1950s to the early 1960s.  According to Saturated Imagery, this chunky viewfinder camera was made by Kodak in the UK from 1955-1958. It is typically simple, virtually the same as a box camera in features except for the moulded Bakelite body.  In a slider over the lens, it has a close-up filter for use with a range of 4-7ft, and a yellow filter – used to heighten the contrast when shooting skies.

The image dates from 1962, a summer’s day out to Doncaster Station with the Altrincham Grammar School Trainspotters Society – an august body of young enthusiasts with a constant eye for mischief. The LNER Class A4 streamlined 4-6-2, Guillemot, is heading north with a passenger service, probably destined for Edinburgh Waverley.  Introduced in 1935, the Gresley streamlined design included a corridor tender, but not this example which is sister to the more famous 60022, Mallard.

Introduced on the 8th January 1938, it was taken out of service on 20th March 1964, not that long after I took this picture.  I have resisted repairing the image – the dust spots add an air of authenticity and help fill an otherwise blank sky – I obviously neglected to use the yellow filter 🙂 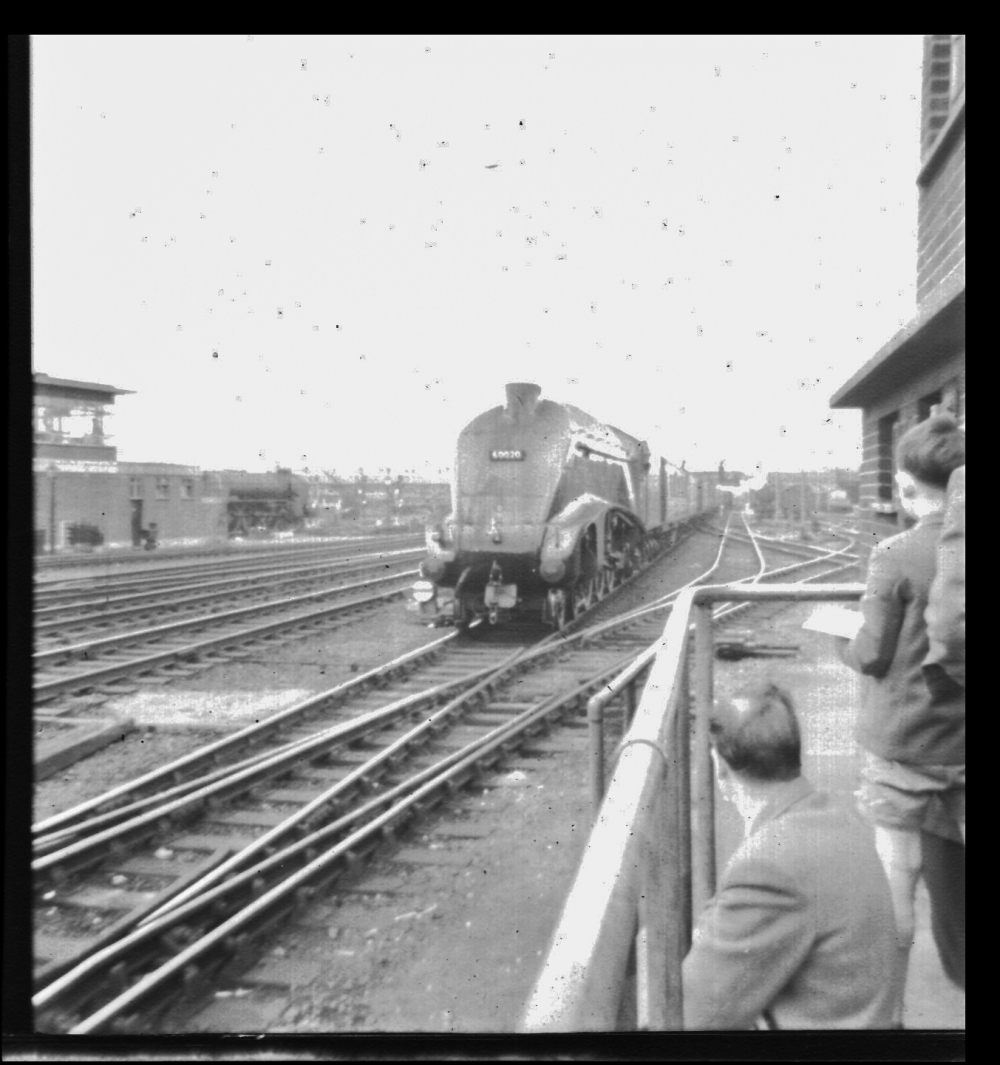 To the left of the image is what appears to be a Standard Class 9F** emerging from Doncaster sheds – introduced in 1955, these were the last steam engines to be commissioned by British Railways.  To the right, in shorts, is a fellow trainspotter, Peter Parker – I could be wrong on both counts.

** Several like-minded enthusiasts have suggested this is a Peppercorn A2 Pacific – it makes more sense and I bow to their superior knowledge.  Looking at the plan of the station on Google Earth, I now think Guillemot is heading south.