In the summer of ’41 a year had passed since the Dunkirk evacuation and the immediate scare of invasion had subdued. In the east, the Germans were encircling Leningrad for the beginnings of a siege that would last 872 days and cost in excess of 632,000 lives.  Nothing was certain, none of the outcomes we now take for granted were known.  Anything could happen.

My father was completing his final year at university, evacuated to Cambridge from Queen Mary College, London the previous year. At some point in late 1940 or early 1941 he had applied for a position at ICI, Manchester and made the trip north for an interview.  That war time rail trip resulted in an offer of employment from Hexagon House, Blackley on 25th March subject to him obtaining a first or second class honours degree.  Dad’s commencing salary as an industrial chemist would be £275 per annum with a £24 war supplement, working for either the Explosives Group (Billingham or Ardeer) or Dyestuffs Group (Blackley or Trafford Park). The offer letter also included this standard caveat:

In view of the Company’s promise to make every possible effort to reinstate those of its employees on 3rd September, 1939 who serve with the Colours, the question of retention in the Company’s service after the war of any employees engaged since that date must be subject to the prior claim of those individuals.

In the early summer of ’41 he would pack up his few belongings and return to his parents home in Andover to await the exam results.  A short bike ride across town to his girlfriend’s house would have helped fill the waiting hours, a welcome simplicity after the years of wartime travel to and from Cambridge.

I am bewildered by what happened next, just a few days after his girlfriend’s eighteenth birthday.  Dad was extremely capable, studious and meticulous.  Popular, good at games and fiercely loyal he was nevertheless a reserved character who never drank; there would have been no distractions.  I can only imagine the disappointment and foreboding when the news came – he had only achieved a B.Sc. pass degree.  A telegram was sent to ICI Blackley.

We are writing to thank you for your telegram and confirmatory letter dated 20th August advising us that you only obtained a pass degree in your recent B.Sc. examination.

In normal circumstances this would disqualify you for a position with us, but we have referred to the notes which we made during the interview and have decided to make an exception in your case.  In the attached formal letter we are making you a conditional offer of a post at our Trafford Park Works, and if all is well we will expect you start with us on Monday, 1st September. 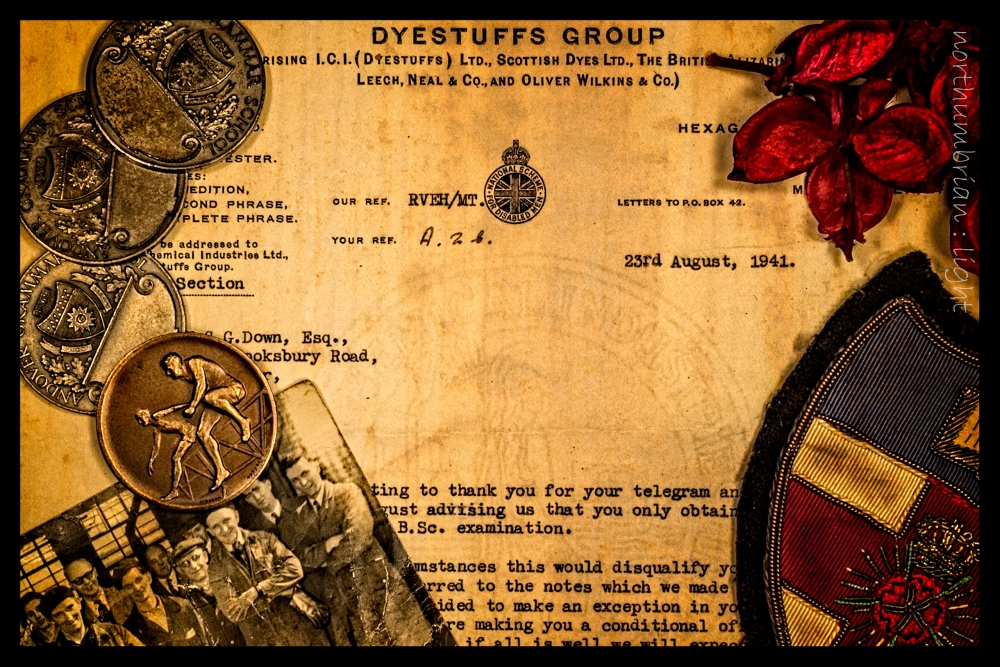 The formal letter contained some further conditions: the aforementioned reinstatement priority for staff who served with the Colours, a medical examination and the following:

It is understood that our offer and your acceptance of employment are subject to your final allocation to the company by the Allocation Committee of the Military Recruiting Department of the Ministry of Labour.

In the dark days of ’41, this vaguely Orwellian government department was tasked with balancing the manpower needs of the Register of Protected Establishments with those of the armed forces; that summer both were suffering significant shortages.  On August 23rd 1941, final allocation to Imperial Chemical Industries was by no means certain.

Ultimately Dad justified the confidence placed in him.  Starting on 1st September 1941 he stayed with the company until his retirement, forty years later.  He married his Andover girlfriend in 1943, and one year later my sister arrived.  The war ended and eventually, perhaps with some reluctance on my mother’s part, I made my appearance.  In August 1941 none of this was known.  Anything could happen.