Much has been written of Askernish Golf Club, an Old Tom Morris course that was only recently rediscovered and resurrected from the dunes.  Knowing its history, this was a pilgrimage that had to be taken.  My preference is for 9-hole courses in wild places and while this is 18, it certainly conforms to the latter preference – golf gets no wilder than this.

We arrived on an April afternoon of ever-changing but forbidding skies and strong westerlies, conditions less than ideal for the golfer, even less for the unenthusiastic ‘caddy’.  A conversation in the clubhouse confirmed I was alone in my madness – the course was all mine – ‘play as much or as little as you like for £15’.  Celtic were playing Rangers in the Scottish Cup that same afternoon which might also have accounted for the empty fairways – I am not usually entirely alone in my madness.

With due consideration for the reluctant lady I was advised to drive across the course to the dunes adjacent to the sixth green and play seven through eighteen – ‘this is the best of Askernish and the dunes will provide some weather protection for your wife’.  All bases were covered – playing the best of the course while showing due consideration for my better half, what more could be asked.  The new clubhouse is about a half mile from the coast and the route across the course was not obvious but with a determination known only to mad golfers, we negotiated the boggier parts of the track to park on the high dunes.

Golf is a game of millimeters.  When the wind is such that standing still on the tee is a challenge, an element of chance is introduced into the game which can work for or against the amateur.  On this day chance was on my side – starting at Cabinet Minister, the seventh, and finishing at Slainte Mhath, the eighteenth, I used the same Callaway Warbird throughout (for non-golfers – it’s a simple golf ball dressed up as something poetic by arty marketeers with beards and too-tight jeans – believe me, not losing it verges on the miraculous).

Finding the ball was also aided by the agricultural.  All of the greens in winter are protected by electric fencing to keep the sheep off the hallowed turf.  This is crofting land and the reinstatement of the course was met by strong opposition from some locals – at least they were not dealing with The Donald and there has been no change to the landscape, either in Old Tom’s time, nor in modern times. 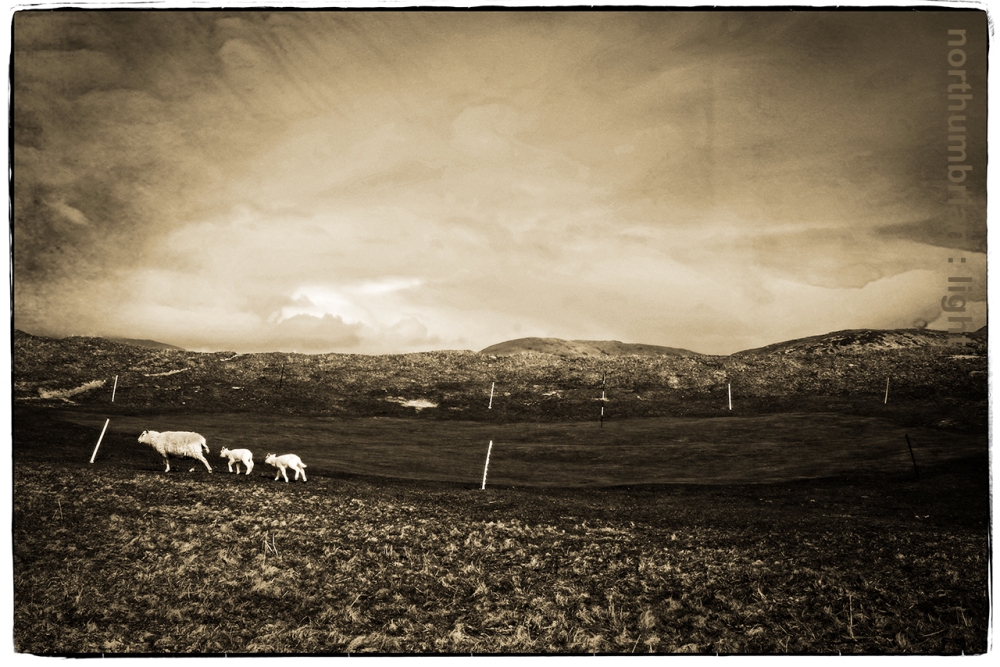 The sheep and the rabbits keep the grass short  throughout winter so a small white ball is easier to find than in summer, no matter how far you stray from the fairway.  Standing on the ninth tee, Brochan, the other reason for the trampled rough became obvious – a herd of cattle, maybe forty strong.  On the left, the bull, to the right his cows and their calves.  My drive landed no more than ten yards in front of the big man – surely he is friendly, surely he wouldn’t be on the course if he was not … or could this be the crofters’ revenge. 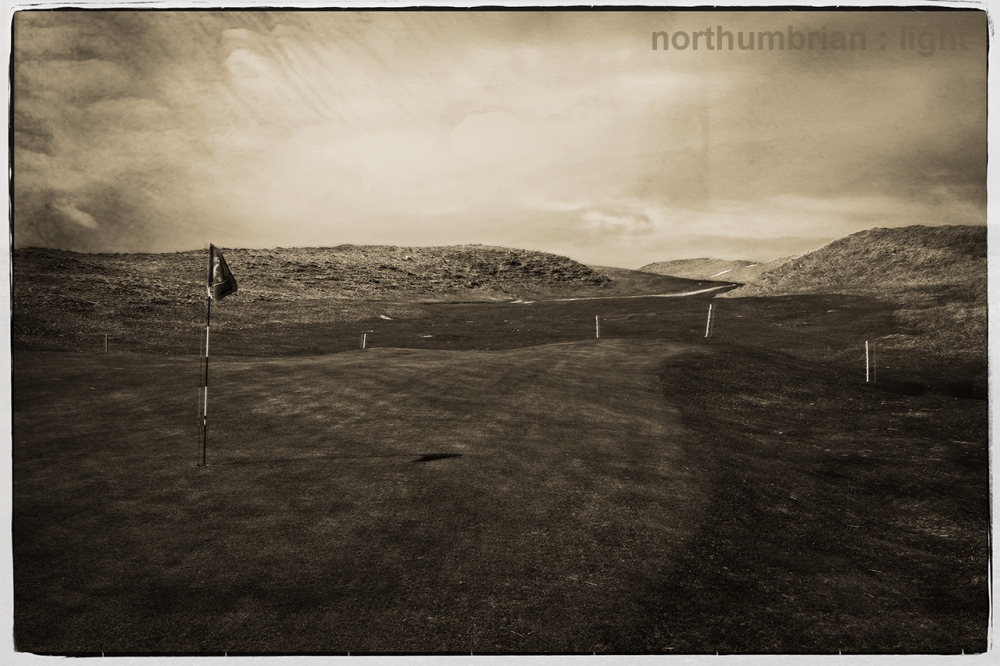 This is golf, every shot must be played.  It was at this point, the ball rested in a hoof mark, I adopted preferred lies in the rough.  My good lady, dressed in bright red and nervous of cattle at any time, was advancing at a pace up the fairway.  The bull was still there over my left shoulder or so I assumed – this shot had to count.  The crisp seven iron shot flew high over the caddy, the bull remained contentedly in place, I lifted my bag and made a swift exit – this was real Golf in the Wild, golf in the raw. 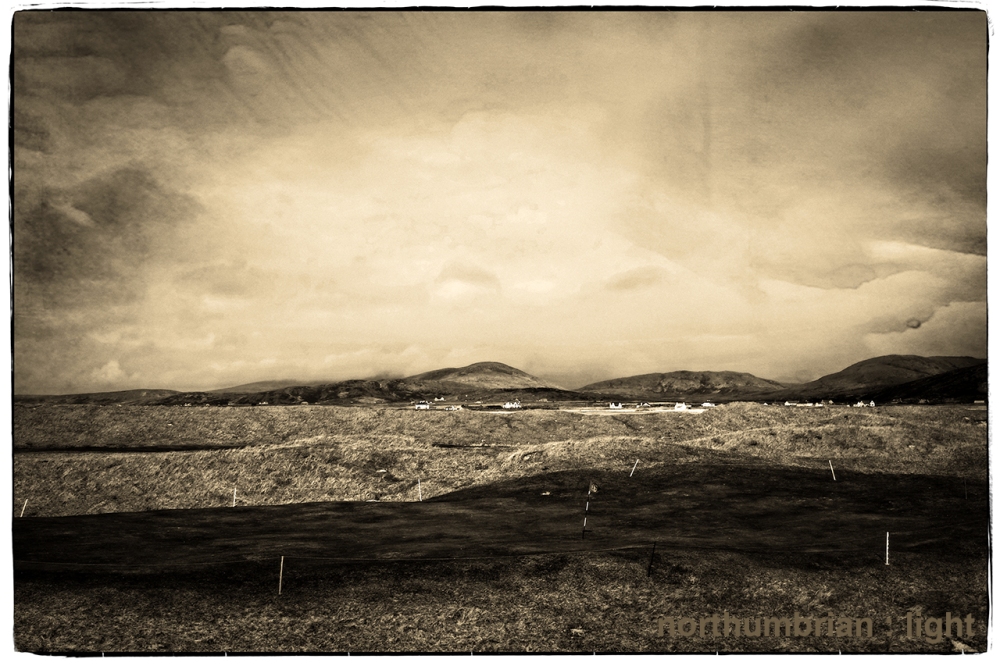 It was a relief to realise that the cattle had confined themselves to the ninth and the remaining holes could be played out in the company of sheep and rabbits.

The rain came and went and the wind swirled but nothing could detract from the glories of Askernish – the testing par 3, Barra Slight, over a deep gully and the 582 yard par 5, Piobarachd, at the extreme south of the course will linger long in the memory.  God must be a golfer – this is nature designed for golf, long before the age of course designers, men with too many dollars and heavy earth moving equipment.

Only at the testing sixteenth, Old Tom’s Pulpit, did common sense and consideration prevail – to the left was the ninth and the herd of cattle, to the right uninviting bog.  We took the high road among the dunes, skipped the hole and played the par 3 seventeenth, Corncrake, where I was rewarded with a par for being such a kind and considerate person.

Needless to say, I will have to return to play one through six and the sixteenth, by which time, maybe the cattle will have moved on.

A superb in-depth post by David Owen can be found here: Back – Roads Scotland: Askernish.

This is the last post from the Outer Hebrides at least until we return.  It is, however, not the last goodbye: