Last week I posted this image on polaroidblipfoto.com.  On a circular walk around Hexham we cut through the golf club car park to avoid the muddy public footpath where shafts of light from a low winter sun highlighted drifting smoke:

A split tone filter from ON1 Perfect Effects has turned the smoke blue which immediately put me in mind of the early television advert based on the Platters record:

They asked me how I knew
It was Esso Blue
I of course replied
With lower grades one buys
Smoke gets in your eyes.

I had hoped to find the original advert on Youtube but this was the best I could find:

All this reminded me that John Betjeman had a fondness for product names like Omo, Oxydol etc but could not find the reference despite much searching on Google.  Instead I found this, one of my favourite pieces by Betjeman which I had not thought of in years – A Shropshire Lad:

I love the rhythm of this poem and its repetition:

I have traveled the full length of the Shropshire Union more than once but could not remember passing through Dawley.  I wondered if the ‘old canal’ might be a convenient invention by Betjeman but a quick Google search came up with this explanation from the Dawley Heritage site:

In 1788 the ironmaster William Reynolds proposed an extension to the Shropshire Canal southwards from Donnington Wood to the River Severn. After parliamentary approval, work started in that year. Following a route alongside the present-day Stirchley Pools and after exiting from a tunnel at Southall, the canal split into eastern and western arms. The eastern arm, through Oakengates to near Aqueduct, was replaced by a railway in 1860 which followed wherever possible the line of the old canal. The western arm from Aqueduct to Coalbrookdale, via Little Dawley, Wide Waters and across Doseley terminating at Brierley Hill declined in use and was closed in 1810 when the new tramway was built from Castle Furnaces across the Lightmoor Valley to Coalbrookdale.

Oakengates, Coalbrookdale and Dawley are all mentioned in the poem.

So, that is how I got from Hexham to Dawley.

As you climb up the golf course approach road you are walking almost parallel to the 18th fairway and at the top is the tee box adjacent to the 17th green.  Earlier in the week this had been as ice-smooth as a skating rink: 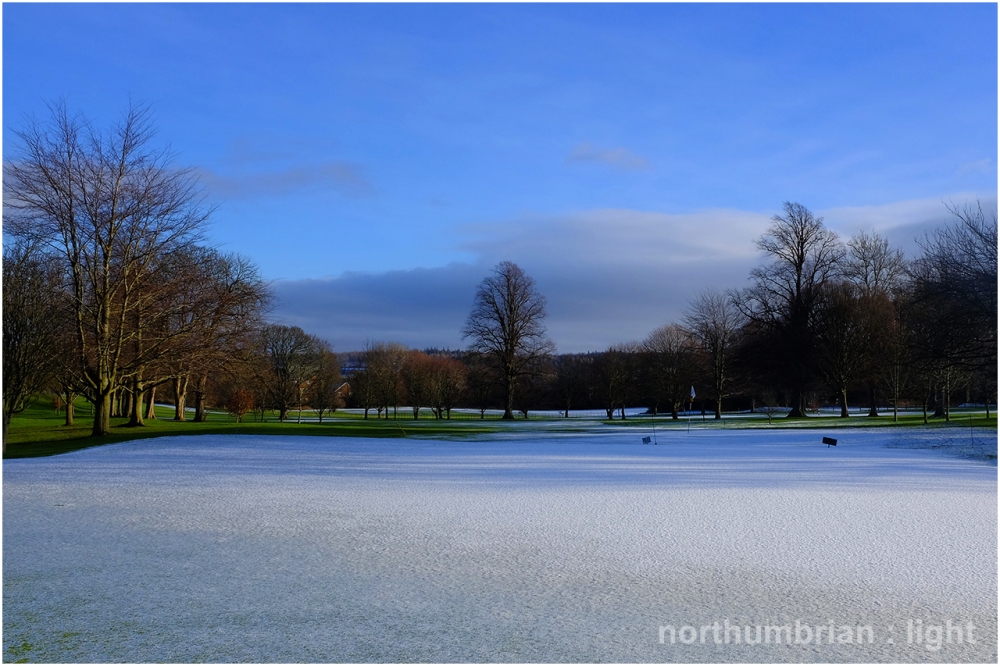 I cannot mention ice rinks without thinking of Ravel’s Bolero … and so,  it goes on, randomly 🙂