My grandparents’ house is still there but it isn’t the same.  The small sloping front garden sat above the main road held back by a tall flint wall.  Opposite, high trees hid the ex-servicemen’s home which still housed the traumatised from the Great War.  The traffic passed by below as if in a railway cutting.  This was a busy artery in and out of town and the main route south from an army camp a few miles up the road; heavy camouflaged vehicles announced their arrival in advance, the whining sound of oversized deep treaded tyres on the tarmac, louder than the engines that propelled them.

The house was a narrow two up, two down, semi-detached whose inside proportions made it feel more like a mid-terrace.  The front door led into a narrow hallway with the parlour off to the right; this, the best room and the front door were reserved for respectable visitors and thus never used.

At the end of the short hallway was the ‘every-day room’, a warm nest with a continuously burning coal fire, even in the height of summer.  Between the front and back rooms, steep narrow stairs climbed across the house between two identical bedrooms; both had brass beds and mattresses shaped with the imprints of their occupants, as though they had fallen to sleep from a great height, as though sad Evelyn McHale slept here.  In the corner of each room was a cupboard, full of cardboard boxes – May’s hat collection.

Out the backdoor was a lean-to greenhouse permanently engulfed with tomato plants – we only ever visited in summer.  If it were not for the greenhouse, the ‘privy’ would have been outdoors and a good deal colder than it already was.  In the back garden, a large green metal water butt collected rain from the lean-to greenhouse and a central concrete path stretched the full length of the garden, given over entirely to vegetables.

In this garden, one cold January morning in 1966, my grandfather collapsed and died.  May died two years later and a few years after that, the busy road in the cutting outside their house was severed by a new motorway a few miles up the hill.  Go there now and the road, like Fred and May, has fallen silent. 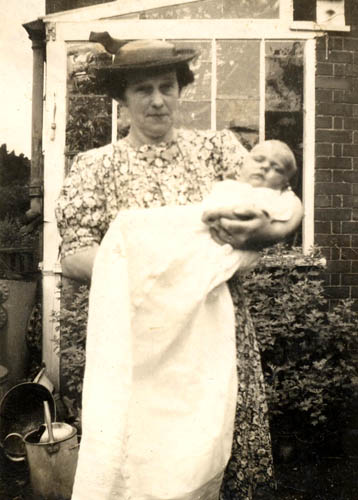 This picture contains some of the evidence.  May, in one of her obligatory hats, is holding my recently arrived sister; this is the summer of 1944.  In the background, the lean-to greenhouse is overwhelmed with tomato plants and the iron water butt is propped up against the wall on the left.  When I finally put in an appearance ‘many’ years later, nothing had changed, not even Mrs Kipper (May).