I first came to New York on a business trip in 1983.  I was part of a project to link up an early distributed electronic mail system between software developers in US and the UK.  It was time consuming, complex and expensive; today I can sit on a ship in the middle of the Atlantic, email friends and neighbours and remotely pan and tilt a camera in my living room.  We have travelled a long way in just under thirty years.

So has New York.  Then it was a darker, dirtier and more threatening place, the transformation is staggering, particularly down the West Side.  In my limited experience the people seem to have changed too; once bit part players in the French Connection, now everyone is straight from a Woody Allen film, particularly the tour guides who have perfected the role of edgy friendly familiarity.  Our first was a Tony Bennett look-alike whilst the water taxi showman was late Dustin Hoffman.  As you travel downtown, unsurprisingly, 9/11 dominates the conversation.

We all know where we were; the Terrazza dell’infinito, Ravello, the most beautiful view in the world, a clear blue sky merged as one with a bright blue sea at an indistinguishable horizon; it seemed like the absolute centre of the civilised world.  Later that afternoon in a back street café, news that the modern world had changed dramatically filtered through in half understood Italian.  Suddenly, the barbarians were at the door.

Michael Arad’s Memorial is a fitting and disturbing monument.  Thirty foot waterfalls endlessly cascade on each side of two pools set in the footprints of the original Twin Towers before descending again into the central abyss.  The names of the victims are etched into the bronze parapets that surround both pools.  It is a chilling and thought provoking place to stand, particularly on a warm blue-skied September day in the shadow of the near complete 1 WTC. 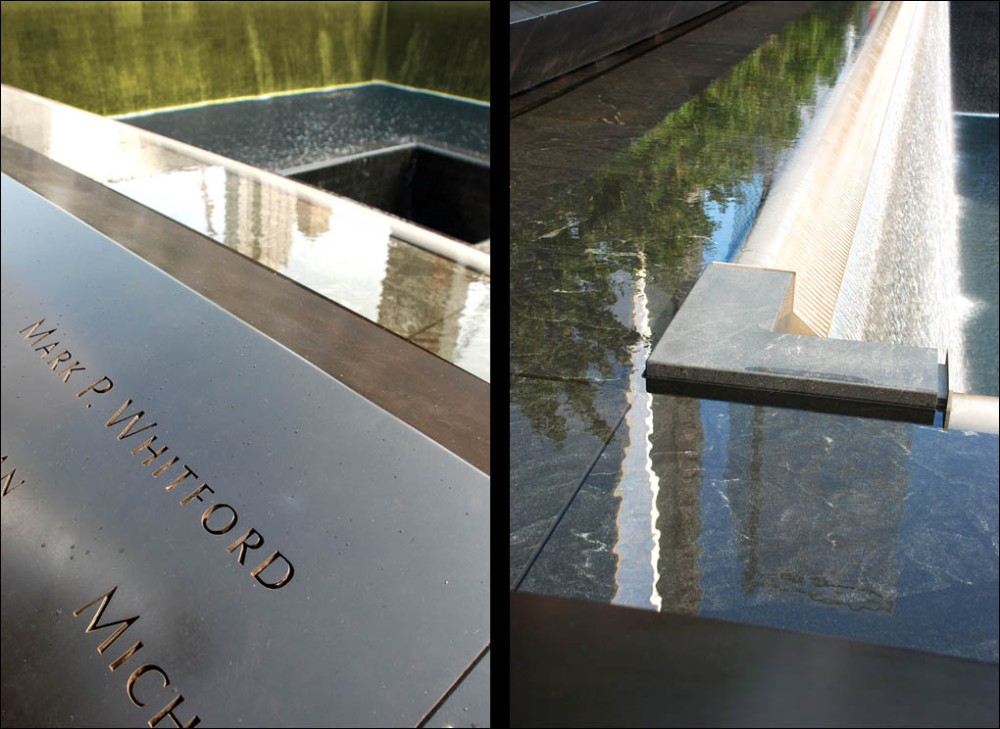