Today, July 18th 2012, the Newcastle Journal has published number three in a series of Great Golf Holes of the North, this time the 17th at Allendale, my home club.  The fine words were by Norman Harris and the picture is mine.

Just occasionally events fall into place.  Despite our awful summer, the weather briefly brightened, the view down the valley cleared, one of our members (Andy Morgan) turned up on cue and chipped a ball onto the green, the camera was already on station 5 meters up a pole, the wireless shutter triggered, the ball was caught in mid-flight (I promise it wasn’t added afterwards, just slightly enlarged) and it all fell into place.  Norman was eventually persuaded that this was the best view of the hole and with some ‘post-production’ figures added to the tee, everyone was content.

Then it appears in newsprint and the detail that provides the atmosphere has gone, the contrast has disappeared and there is no depth to the picture.  So, to set the record straight, here is the original – still not as good as the high resolution version (WordPress compression does it no favours) but still a marked improvement on the newsprint version.  Click on the picture to see a slightly enlarged version. 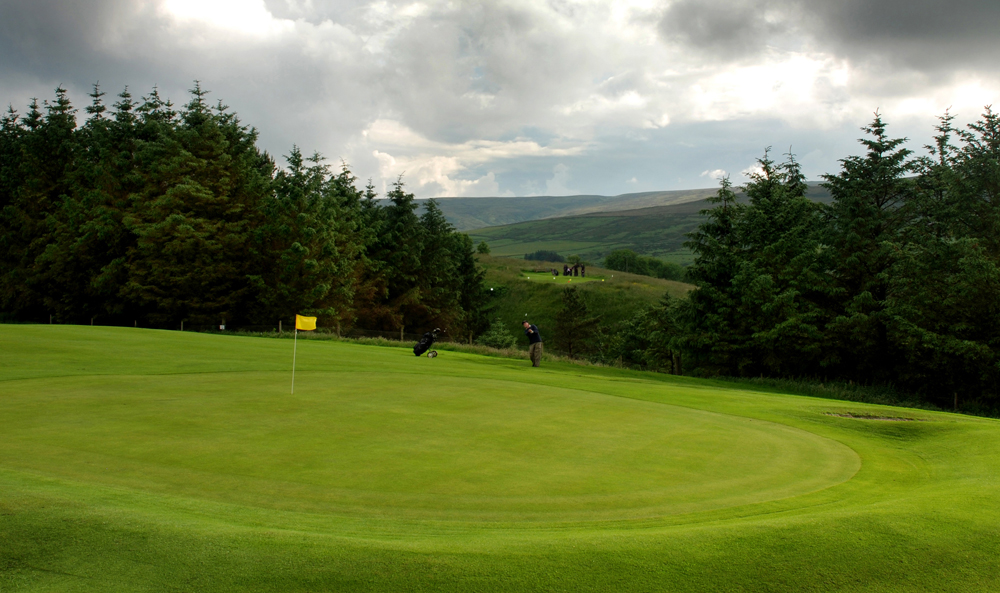 Postscript:  It turns out the Journal also fiddled with one of the paragraphs.  This is what Norman Harris actually said:

Intriguingly, there was once an issue with this 17th hole. When the course was established in 1992 the nine holes were played twice from the same tees. Then came the idea of having alternative tees on the second nine.

A number of players thought that a retrograde step – though possibly  this resistance was all down to the new 17th seeming to be just too difficult. Not least by the ladies, who opted to play their tee shot from the drop area.  Now, they face up to the challenge of clearing the canyon, regardless of the possible consequences.